Welcome to the homepage for biocontrol in Hawaiʻi, hosted by the Hawaiʻi Invasive Species Council.  No idea what biocontrol is? Scroll down to learn more and how it works in Hawaii, or check out the history of biocontrol in Hawaiʻi or FAQ pages for more information. Already a biocontrol expert and want to know the latest? Use the buttons above to learn about new and upcoming biocontrol projects (such as potential projects to control miconia, albizia, himalayan ginger, and more!) or submit comments and questions about upcoming projects.

The story of Wiliwili and Biocontrol is here!

Check out this new video above, produced by the Coordinated Group and Alien Pest Species and the Department of Land and Natural Resources, that tells the story of how a biocontrol wasp helped save the native Hawaiian wiliwili tree from extinction.

Classical biological control (biocontrol) is the selection and introduction of a natural enemy of an invasive plant or insect pest which suppresses that pest in its home range, and the “reuniting” of this natural enemy with the invasive pest to provide long-term, cost-effective, and sustainable pest management. There are other forms of biocontrol, including augmentative and conservation biocontrol (learn more on those here), but this site does not focus on those types.

Why do we need it?

The Hawai’i State Legislature has defined invasive species as the “single greatest threat” to our economy, natural environment, and health of our communities. When invasive species arrive in Hawaiʻi, they almost never encounter the environmental conditions or species that kept their populations under control in their home range. Released from natural controls, some invasive plants and insect pests are beyond our ability and capacity to eradicate or even control by labor, pesticides, or other methods. Many of these invasive species are simply left to spread because there are no viable options. However, there are some invasive species that, if left unchecked, pose too high a cost. Their continued spread can endanger native plants or animals (sometimes to extinction), damage infrastructure like roads and housing, and decrease water supply among other problems. A successful biocontrol reduces the future impacts of the targeted invasive pest.

How does it work?

In modern biocontrol, extensive testing is done to ensure the natural enemy is specific to its host prior to release.  Testing is done in secure facilities to see if the natural enemy will impact non-target organisms.  This critical step did not occur in many releases prior to the 1970’s, which led to notorious problems like the mongoose (More on that here).

Following, or sometimes in tandem with testing, an environmental review process will start, where the public and other stakeholders can review and comment. After public comment and review of the project by independent experts in the field, a finding of no significant impact (FONSI) may be issued. Upon receiving final approval, the natural enemy can then be released and closely monitored to determine its efficacy and impact.

Biocontrol projects in Hawaiʻi are cooperative efforts between multiple agencies and organizations, including the Hawaiʻi Department of Land and Natural Resources Division of Forestry and Wildlife, Hawaiʻi Department of Agriculture, USDA Forest Service, University of Hawaiʻi, and international partners to plan, research, implement, and monitor projects.

Moving organisms will never be without any risk, but modern requirements for testing and “host specificity” in biocontrols has led to a very safe and effective recent track record. Modern rules and regulations has led to over 50 introductions and over 45 years in Hawai’i with no environmental or non-target impacts to species other than their intended invasive pest target.

Another benefit of biocontrol is that it can reduce the need for chemical or manual control of invasive species, which have their own impacts on the environment. Also, it is important to remember that doing nothing and allowing invasive species to spread unchecked leads to its own safety concerns and impacts to the environment.

If you are a land manager and want to learn more about how to release and use Tectococcus ovatus, a leaf galling biocontrol for strawberry guava (Psidium cattleianum), click on the image below: 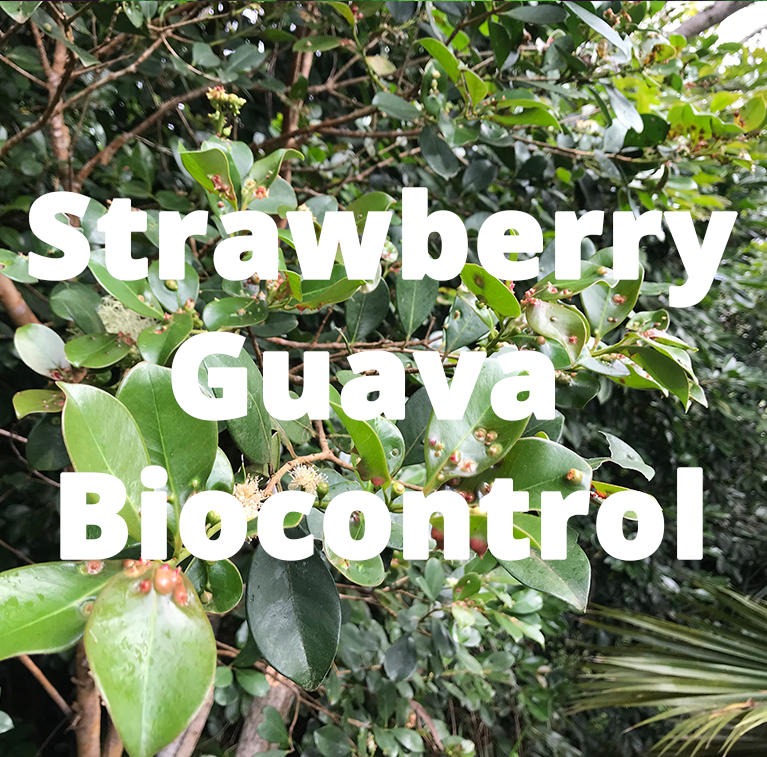