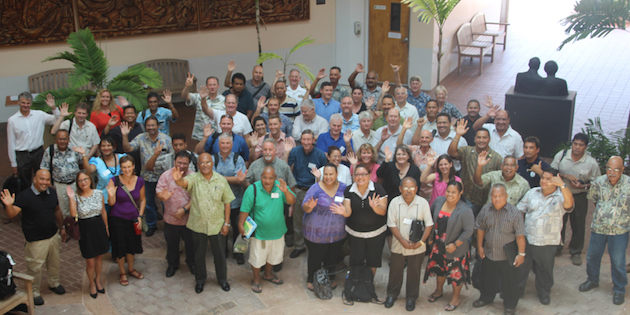 Participants in the final workshop for the RBP join at the University of Guam in May, 2014.

In 2015 the U.S. Department of Defense (DOD), Department of the Navy completed the Regional Biosecurity Plan (RBP) for Micronesia and Hawaii. The RBP is an unprecedented effort to analyze risks and coordinate enhancements in biosecurity. The RBP was initiated as part of the environmental impact analysis for a plan to potentially relocate military personnel from a base in Okinawa, Japan.

In addition to these risk assessments, the RBP includes biosecurity recommendations for each of the jurisdictions covered within the geographic and political scope of the document. Those jurisdictions include the State of Hawaii, the Territory of Guam, the Commonwealth of the Northern Mariana Islands, the Federated States of Micronesia (FSM) national government as well as the individual state governments of Yap, Chuuk, Pohnpei, and Kosrae, the Republic of Palau, the Republic of the Marshall Islands, the U.S. DOD, and the U.S. Federal Government, as it relates to its jurisdictions within the region.