FY05 (July 1 2004-June 30 2005) was the first year that the HISC disbursed project funding. The HISC disbursed $4M in FY05 to support projects relating to invasive species prevention, control, outreach, and research. A full description of FY05 activities can be found in the 2006 legislative report. Individual project summaries are below.

[learn_more caption=”Ecological consequences of the coqui frog invasion into Hawaii”]

Summary: coqui were introduced from Northeastern Puerto Rico. In March 2004, the Mayor of Hilo, Hawaii declared the coqui frog situation a state of emergency. This frog impacts Hawaiian ecosystems, especially native birds and threatens the multi-million dollar floriculture and nursery industries. Its 90-decibal mating call is driving down property prices on the Big Island. To date efforts have focused on eradication, but scientists are now trying to understand its ecological impact. Frogs diets were examined, they eat endemic beetles, mites, springtails and flies as well as a variety of non-native species. Meanwhile there was no evidence that the frogs reduced non-native invertebrate pest populations. Where frogs were abundant leaf litter decomposition and nutrient cycles changed, and invertebrate abundance declined . Fulltext. Frogs were found to be infected with a fungus implicated in the declines of frogs elsewhere, but it appeared to have little effect in terms of controlling frog populations on the Big Island. Abstract. Rats were not found to eat coqui. Despite high coqui abundance mongoose ate few frogs. Cane toads did not eat coqui. Repeated aerial treatments with 11% citric acid were found to effectively control frogs, but reinfestation from untreated areas followed.

Final Report to the HISC

[learn_more caption=”Detecting the veiled chameleon on Maui: A research proposal to enhance control of an injurious species”] 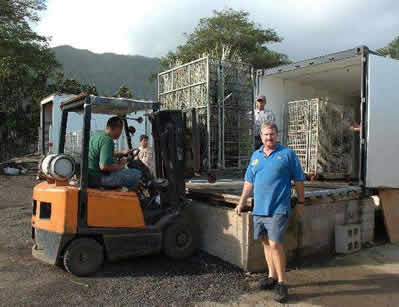 Summary: Bill Durston successfully developed a facility for treating pallet loads of plants with hot water. This kills frogs found on plants and is an effective means to prevent the movement of coqui frogs from the Big Island in nursery plants. The Department of Agriculture has adopted the technology.

Summary:A system for community based reporting and data collection was developed. Maui public can be part of the “eyes and ears” team.

Summary: Hawaiian coral reefs are under attack by invasive alien algae. Dubbed the “Super Sucker” for its giant vacuum action, a mechanical alien algae suction device sits in O’ahu’s Kane’ohe Bay dredging thousands of pounds of seaweed from the reefs off the islet of Moku O Loe. The removed seaweed is then used for compost by local taro farmers. Scientists are also testing a native sea urchin to help control the re-growth of algae after its removal.Gracilaria salicornia and kappaphycus/Eucheuma spp are the target species which have spread widely in the last decade. The control resulted in less seaweed accumulating on nearby beaches and helped some corals to recover. Though the study was carried out Kaneohe the supersucker has been used elsewhere to good effect since then.

The nettle caterpillar, Darna pallivitta, is an invasive pest on the island of Hawaii , causing defoliation of ornamental nursery stock and posing a human health hazard due to their painful sting. This project resulted in the development of pheromone lures that attract male moths. The lures were used in 2007 to delimit invasions of the moth on Maui and the Oahu where the moth was accidentally imported with nursery plants from the Big Island.

Summary: Miconia calvescens DC (Melastomataceae) is an invasive tree considered to be the greatest threat to natural ecosystems of Hawaii and other Pacific islands. A number of agents were found and two fruit-feeding insects, a gall wasp, Allorhogas sp. (Hymenoptera: Braconidae), and a beetle, Apion sp. (Coleoptera: Curculionoidea), were evaluated in their native habitat in Brazil as potential biological control agents of miconia calvescens DC (Melastomataceae) in Hawaii. The potential of the sawflyAtomacera petroa Smith (Hymenoptera: Argidae) as a biological control agent of M. calvescens was evaluated in field and laboratory studies in its native range in Brazil.

Summary: Miconia calvescens DC (Melastomataceae) is an invasive tree considered to be the greatest threat to natural ecosystems of Hawaii and other Pacific islands. Biologists call miconia “The plant that could destroy the Hawaiian forest.” The most threatening invasive plant in Hawaii, this weedy tree shades out all plant life beneath it, keeps water from penetrating the soil, and causes soil erosion. The objective of this study was to obtain host specificity data and evaluate the suitability of Diclidophlebia sp. for release in Hawaii for biocontrol of miconia calvescens. Work is still under progress.

Summary: A database has been compiled of global reptile and amphibian introductions for use in identifying introduction pathways and analyzing how these pathways vary spatially and temporally. Approximately 3900 literature citations are documented for 675 taxa of reptiles and amphibians outside of their native ranges, 322 of which have established new wild populations. One report from a symposium in Fort Collins, Colorado August 7-9, 2007 “Managing Vertebrate Invasive Species” provides and overview of the findings and what the signify for management of herpetological invasions. Kraus’ work has also contributed to international efforts to understand pathway and impact risk Bomford, M. Kraus, F., Braysher, M. Walter, E. and Brown, L. (2005)Risk assessment model for the import and keeping of exotic reptiles and amphibians. Report prepared for the Department of Environment and Heritage by the Bureau of Rural Sciences, Canberra, Australia.

Summary: This study documents the detrimental effects of two (big-headed ant, Pheidole megacephala and tropical fire ant, Solenopsis geminata) widespread invasive ant species on growth and survival of colonial nesting seabirds in the Hawaiian Islands- North Mokulua and Mokuauia. Nesting success (survival of chicks) improved with the removal of ants, which through the course of this study appear to have been eradicated from Mokuauia.

Summary: Evening will find the red-masked parakeet roosting in the trees of suburban Honolulu. Botanists are using customized mist-net live capture and radio transmitters to track flight and foraging patterns, as well as roosting locations, to help in control of this invasive bird. This species can disrupt cliff roosting and nesting shearwaters and petrels where they roost and may spread miconia seeds and the seeds of other invasive species. Observations of flight patterns, distribution and foraging behavior are being made to determine its potential impacts.

Summary: First discovered at Pearl Harbor in the 1970s, the invasive snowflake coral Carijoa riisei is now the most destructive species to infest the waters of Hawaii. Coming to Hawaii on the hull of ships from its native range in the Western Atlantic, it is spreading to all the main Hawaiian Islands. This alien soft coral threatens the black coral beds of the Au’au Channel and their $33 million precious coral industry. Scientists believe they may have found a natural biocontrol agent in a widespread predatory nudibranch. Control of this invasive coral on Kauai was examined using mechanical means, especially the use of fresh water. The origin of the coral was examined through genetic analyses, and the species is from the Indo-Pacific.