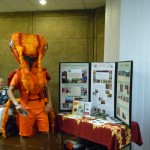 Raising awareness about invasive species in Hawaii is the primary purpose of the outreach working group. The focus of this group is to encourage citizens, law makers, and businesses to make responsible and informed decisions to protect Hawaii.

Next Meeting: TBD; online via Zoom due to COVID-19 guidelines

Outreach WG Meeting Agenda  (scroll down for Past Meeting agendas)

Goal 1: There is statewide coordination of invasive species outreach.

Support for invasive species work relies on strong understanding and support of the issues from the general public, decision makers, and industry. Statewide outreach campaigns should address the overarching priorities for invasive species issues in Hawaii. Statewide coordination will result in clear consistent messages that increase stakeholder awareness, support, and engagement.

Goal 2: All stakeholders are informed and engaged in invasive species efforts.

Goal 3: Outreach and collaborations on invasive species issues are culturally relevant and inclusive.

It is important that invasive species work have broad support of our missions and strategies across cultures. All of our work should strive to be culturally inclusive and ensure that lands and practices are respected.

We are promoting simple, easily remembered, one sentence messages to the public: