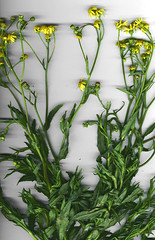 Report this species if seen on Kauai, Oahu, or Molokai

Fireweed is already widespread on the islands of Maui, Oahu, Lanai, and Hawaii, but can be prevented from invading Kauai. Fireweed is a daisy-like herb that grows up to 2’ high. The stem is upright and slender with bright green leaves. The leaves are smooth, very narrow (only ¼” wide), have serrated edges, and they reach about 5” long. The small yellow flowers have 13 petals and are about the size of a nickel. The mature flowers turn into white thistle-like downy seed balls.

Fireweed invades pastures, disturbed areas, and roadsides. It is very toxic to cattle, horses and other livestock. When ingested it causes illness, slow overall growth, liver-malfunction and even death in severe cases. In Australia, fireweed costs over $2 million per year in losses and control.

Fireweed is native to Madagascar and South Africa. Fireweed was first discovered on the Big Island in the 1900’s and is now too widespread for control there. This pest can also be found on Maui and Lana’i. On Kaua’i, known infestations from hydro-mulched areas near Halfway Bridge and in Kalihiwai were controlled by KISC and HDOA. Kaua’i, O’ahu, and Molokaʻi continue to be monitored for new infestation areas. The preferred habitat for this weed is disturbed grasslands, abandoned pastures and roadsides. Fireweed grows on a wide range of soils in sub-humid to humid subtropical woodland.

Spanish needle (Bidens pilosa): Spanish needle is a widespread invasive herb on Kaua’i. It has tiny yellow flower clusters unlike fireweed’s daisy-like flowers. Spanish needle also grows much taller; up to 6 feet. THIS LOOK-ALIKE IS ALSO A PEST!

Wedelia (Sphagneticola trilobata): Wedelia is another widespread invasive herb that is commonly planted as an ornamental groundcover. It can be distinguished from fireweed by its larger yellow flowers which grow 1-2″ wide. It also has a variable amount of pedals, unlike fireweed’s constant 13. THIS LOOK-ALIKE IS ALSO A PEST!