Report this species if seen on Kauai 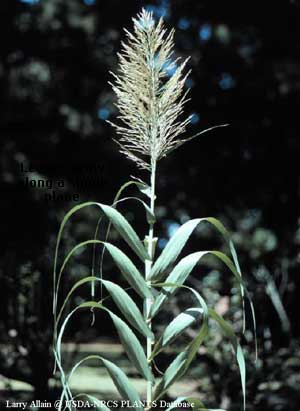 This large, clump forming grass is one of the fastest growing terrestrial plants in the world, growing 4” a day and up to 8 m (16’) tall. It has stiff leaves with a clasping connection to the stem and small hairs along the margins which are felt when the leaf is rubbed in the wrong direction. Its long leaves grow to up to 70 cm (2’) long in an alternate pattern along a single plane. Large plume shaped flowers up to (1 m) 3 ft in length develop between March and September. Forms thick masses of scaly rhizomes (horizontal underground roots) and has hollow stems.

Giant reed grows in wet areas, such as in coastal areas, in wetlands, along streams, ditches, and rivers. Once established this grass forms impenetrable thickets that can cover several acres with clonal root masses up to 3’ thick. It outcompete all other vegetation, traps debris, reduce water flow, is a fire hazard when dry and eliminates wildlife habitat. Spreads easily by root and stem fragments floating downstream and taking root, or when dirt containing root pieces are moved (e.g. in topsoil or on heavy equipment such as bulldozers).

If you see this species, call 643-PEST, visit www.reportapest.org  or call KISC if found on Kauaʻi. 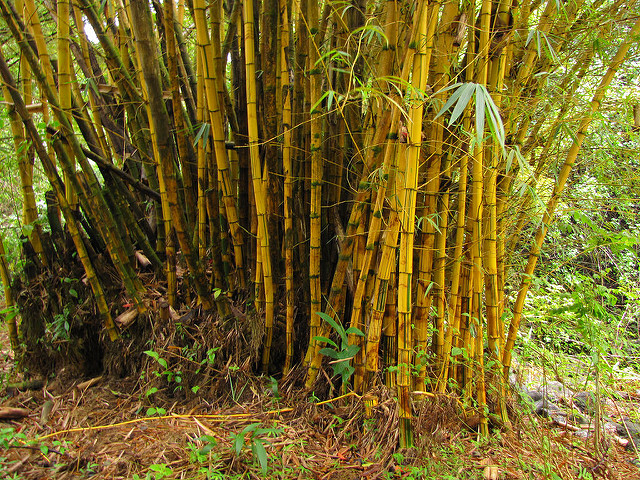 : Bamboo is a perennial grass commonly seen on throughout Hawaiʻi. It can be distinguished from giant reed by clearly marked internodes along the stem.

Sugarcane (Saccharum officinarum): Sugarcane is a perennial grass with similar growth structure and leaves as giant reed. It can be distinguished from giant reed by its longer leaves arranged in an opposite pattern and its clearly marked internodes along the stem.