Report this species if seen on Oahu

Tibouchina species usually have fuzzy leaves with prominent veins and showy purple flowers. Tibouchina plants have been grown as ornamentals. 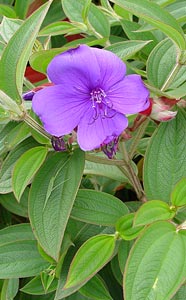