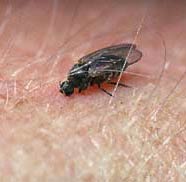 The introduction and establishment of any one of these pests could cause serious harm to Hawaii’s tourist-based economy, severely impact Hawaii’s native and non-native fauna, and forever change the way people live in the islands.Biting flies are flies that attack man and other animals and include the following families or groups of flies: biting midges (Ceratopogonidae), sand flies (Psychodidae), blackflies (Simuliidae), and mosquitoes (Culicidae). Collectively, these flies are found throughout the world, many in the tropics and subtropics. They are small, even tiny, and include many species, some of which are vectors of diseases while others bite and cause considerable nuisance and health-related problems. The ones of concern to Hawaii occur primarily in the southern U.S., Asia, South Pacific, and Oceania. Many of these species are fungus feeders, and their habitats usually include decaying vegetation and/or damp, semi-aquatic habitats. These pests could enter the State on live plants, especially those with associated decaying material. They may also be transported in small boats or airplanes transiting from other Pacific islands or by passengers or cargo arriving in commercial boats and airplanes. They were recently prevented from entering the State on Polynesian voyaging canoes returning from the South Pacific. Psychodidae (sand flies) occur in the southern U.S. and in the tropics. They are bloodsucking and are known to be vectors of several diseases. They also occur in Europe, South America, and Southern Asia. The larvae occur in decaying vegetable matter, mud, moss, or water, sometimes in drainage or sewers. Simuliidae (blackflies) are vicious biters and serious pests in some parts of U.S. They attack livestock and can cause death to livestock and humans. They have a wide distribution and are most numerous in the temperate and sub-arctic regions of the U.S. In the U.S., it is not a vector of disease, but in Africa, Mexico, and Central America, they are vectors of diseases. Culicidae (mosquitoes) larvae feed on algae and organic debris. Adults are vectors of various diseases, and feed on nectar and plant juices.