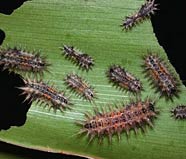 The stinging nettle caterpillar is the 1st larval form of an Asian moth. It is covered with rows of poisonous spines. The coloration is variable, ranging from white to light grey, with a dark stripe running down the length of the back. Populations peak during the summer months.

This caterpillar produces a painful sting filled with a burning, itching sensation and may cause an allergic reaction. The skin will swell and create a welt that may last for days followed by a persistent rash that may last for weeks. In the nursery industry, stinging nettle caterpillars feed upon and damage crops. It is found to feed and breed on coconut, mondo grass, ti plants, areca palm, Dracena spp., fishtail palm, rhapsis palm, walking iris, banana, honohono grass, and a number of other plants.

No action is required, as this species is widespread and is not part of a current control effort.