Not known to be established in Hawai’i

The Red Imported Fire Ant is not currently known to occur on any Hawaiian island. This small reddish-brown ant can vary in size, from 3-6 mm (1/8-1/4 in). Head size is always the s 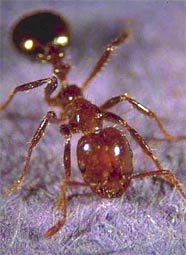 ame proportion to body size, with no “big-headed” workers. This ant has an opaque shiny black abdomen. The ants build dome shaped mounds of fine soil, usually in sunny areas, but can appear anywhere. These mounds are variable in size, from a few inches wide to 0.6 m (2 ft) and have no visible opening. When these mounds are disturbed, the Red Imported Fire Ant (RIFA) will aggressively swarm out of the nest and sting anything with proximity. These stings cause blisters filled with white pus that last for several days.

RIFA pose a serious threat to human health. Large numbers of ants will rapidly swarm on and relentlessly sting anything unfortunate enough to disturb them. In the U.S., millions of people are stung each year. RIFA stings cause blisters filled with white pus which lasts for several days. In infested areas, they may cause injury or death to livestock, pets, and wildlife; damage crops, ornamental plants, electrical equipment, and irrigation systems; and cause serious declines in biodiversity.

Native to South America, RFA were accidentally introduced to Alabama in the 1930s as a stowaway in cargo, and have since spread across the southern United States, Australia, Hong Kong and Taiwan. RIFA are not known to be present in Hawaiʻi at this time. However, they could easily arrive hidden in cargo, carried by planes or ships, or even in infested mail parcels, as was seen in 1991, when an infested package from Florida was intercepted at a Honolulu post office.

If you see this species call 643-PEST and/or visit 643pest.org to report the sighting.

Tropical fire ant (Solenopsis geminata): The tropical fire ant is common throughout Hawai’i. A microscope is required to tell the difference between the tropical and red imported fire ants. This small red ant is 3-6 mm (1/8-1/4 in) long. Some of the workers will have proportionately large, square heads. This ant is restricted to dry coastal areas and nests in the soil, it does not construct mounds. Tropical fire ant stings will cause irritation, but should not cause white pus filled blisters that persist for days.