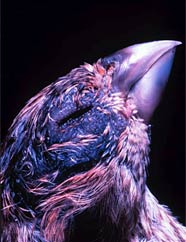 West Nile virus (WNV) is a potentially serious illness caused by a flavivirus that cycles between bird hosts, carried by mosquitoes. It is unlikely that the level of West Nile virus in the blood of horses and humans would be high enough to transmit the disease when bitten by another mosquito.