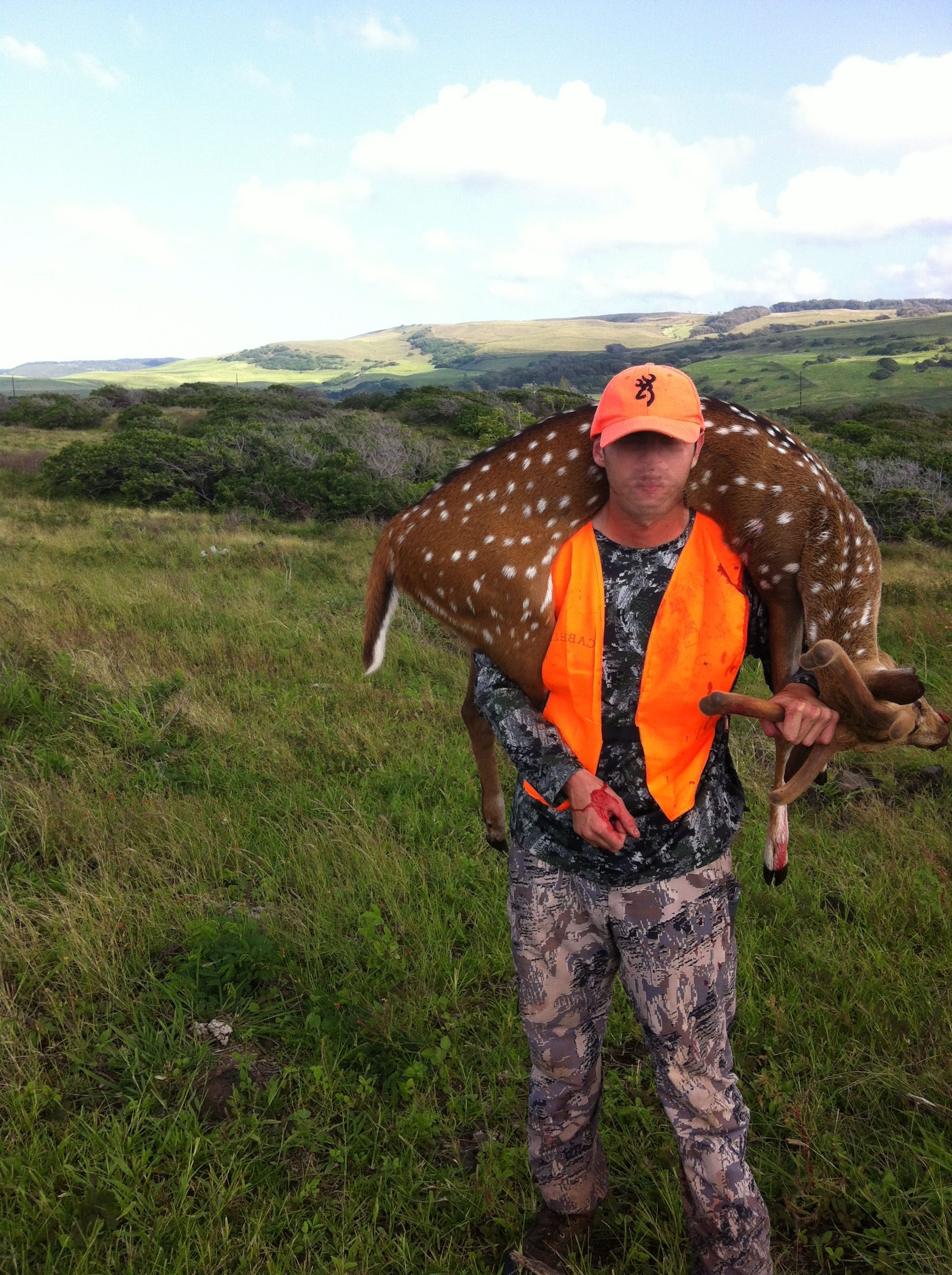 An axis deer captured on Hawaii Island in April of 2012.

HILO — To protect Hawaii Island from the impacts of illegally introduced axis deer, the Department of Land and Natural Resources (DLNR) has been providing resources for a team to investigate the known locations of deer and begin controlling the invasive species. Axis deer are not native to Hawaii and are known pests of agriculture, as well as native and culturally significant plants, many of which are already endangered.

Recognizing the impact that this invasive species can have on Hawaii Island cattleman and farmers, many of whom are already dealing with the effects of extended drought conditions, a partnership between conservation groups and the agricultural community was formed last year.  With support from DLNR, it has since proved its readiness to address this new threat with the taking of the first axis deer on Hawaii Island on April 11, 2012, as part of an official program to remove these unwanted pests from the island.

This comes after nearly a year of extensive field surveys, training and coordination with land owners and managers. The team is actively working toward the goal of eradicating the population before Hawaii County ranchers and farmers face the same problems now occurring on Maui and other places where deer populations are exploding at the expense of local agriculture, native plants and animals, and human communities.

“We only need to look at Maui to see the devastating impacts axis deer can have on local people, especially ranchers and farmers,” said William J. Aila, Jr., DLNR Chairperson. “For the past year we have been chasing reports and leads about several deer populations on the Big Island, and we are very pleased to see the progress being made by the team. We are hopeful that, with the community’s cooperation, we will get all the deer off the Big Island before it’s too late.” 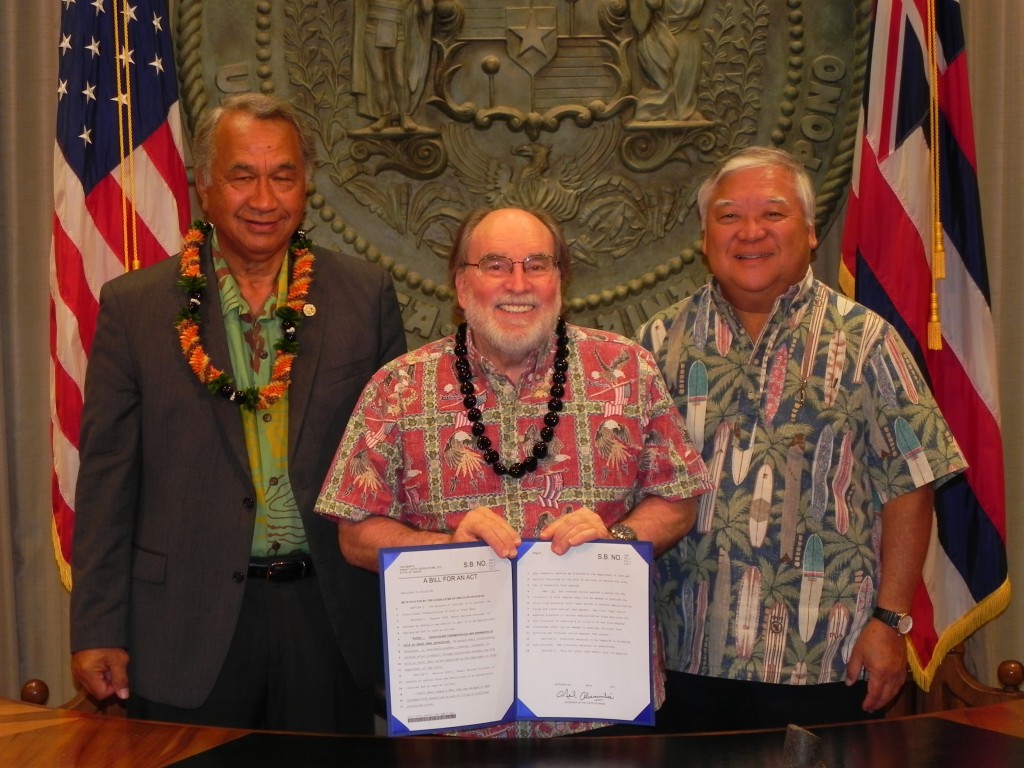 Senator Gil Kahele, Governor Neil Abercrombie, and Senator Clarence Nishihara at the signing of a bill to prohibit the possession, transport, or release of deer in Hawaii.

Officials believe the axis deer were smuggled to Hawaii Island and released by private individuals. State Senator Gil Kahele and government agencies have responded quickly by reviewing existing statutes and rules to strengthen them and increase penalties for unsanctioned movement of game mammals.

“I want to commend the DLNR, Hawaii Invasive Species Council and the Big Island Invasive Species Committee for their efforts to control, and for working closely with the local ranchers and other land owners, which has led us to this success,” said Sen. Kahele. “This is an issue that needs immediate resolution by getting rid of the deer before they become a problem. I think this issue really emphasized the need to focus more attention on interisland transportation issues to prevent this from happening again.”

Unlike Maui, which has struggled with the damage done by axis deer on farms and ranches, and in the forest and watersheds, Hawaii County has been spared these impacts without an established axis deer population in the past. 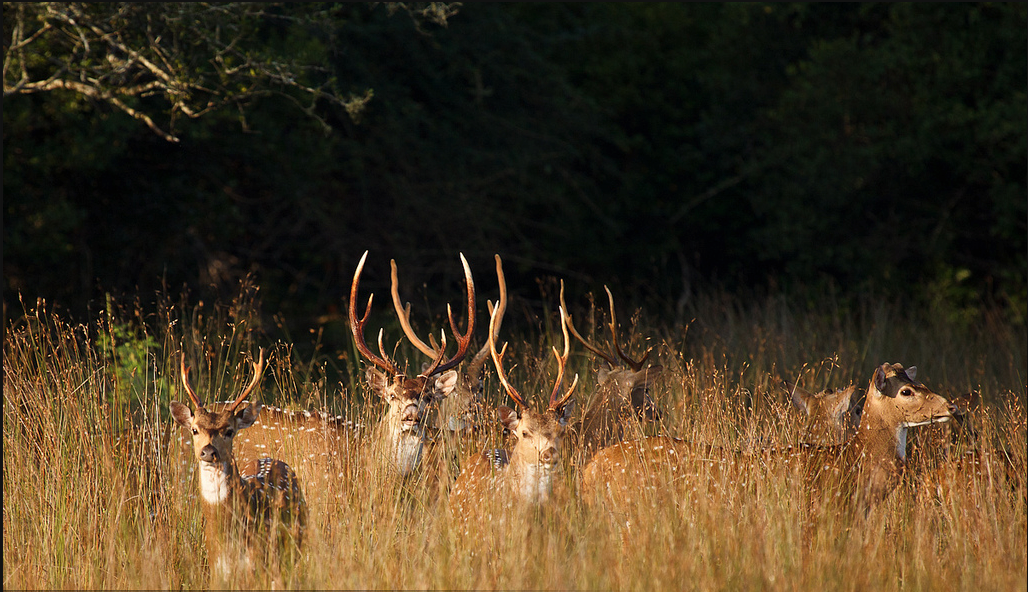 In response to the recent effort of the partnership, Tim Richards, president of the Cattlemen’s Association and owner of Kahua Ranch, said: “We are concerned about the impact that deer have had on our neighboring islands – and the losses that farmers and ranchers have incurred, especially during drought. The axis deer has proven itself to be a menace to the cattle industry specifically. If we want to promote local food production and sustainable ranching, then we need to get rid of the deer before they become established.”

Hawaii Island conservation groups are also concerned about the impact another ungulate (hoofed animal) will have on native ecosystems already under threat, particularly one that can leap over fences 10 feet high.

Although the Big Island Invasive Species Committee (BIISC) is staffing the control effort, it is being guided by DLNR and other conservation organizations and agriculture associations.

Jan Schipper, BIISC manager, said: “We are fortunate to have two highly skilled marksmen working on this project — both trained by hunters on Molokai — to ensure that animals are treated as humanely as possible. We are not able to disclose the exact locations of deer we have sighted, or the animal that was shot, out of respect for cooperating landowners’ privacy. We are mindful that trespassing and poaching are a major concern for some landowners.

“We have a very strict protocol in place to ensure that we not only remove the problem deer with the landowner’s blessing, but also verify that the deer do not have any diseases. Since we do not know who brought the deer, where they came from or how they got here, we cannot be sure of the risks these animals present, so we are taking every precaution.”

Reports of axis deer sightings across the Hawaii County have been increasing over the past year, since the Big Island Invasive Species Committee took a photograph of one in Ka‘u District with a game camera on April 29, 2011. The game camera was set up in response to a deer sighting by local ranchers. Before then, the project has focused on mapping the distribution and confirming the numerous reports, and photographs were the only solid evidence of their existence.

The first attempt to bring axis deer to the Hawaii Island for game hunting began in the 1950s and 1960s – a process which was halted by protests from the farming and ranching community who were already aware of the risks of this animal. Now, over 50 years later, ranchers and farmers are again raising their concerns over the threat these deer pose – especially in light of recent flurry of reports of deer in areas dominated by local agriculture.

As Hawaii is working towards greater food sustainability, protecting local, diversified agriculture from the devastating impacts of axis deer will be critical.