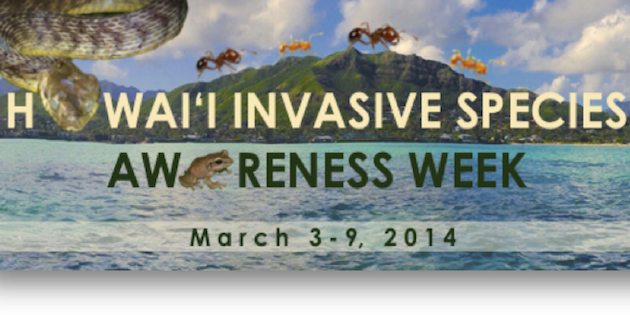 Governor Abercrombie has made invasive species an administration priority by supporting his cabinet to work across departments as members of the HISC and endorsing 2014 legislative initiatives proposing up to $5 million to meet operating costs of Invasive Species Programs.  “Protection of our environment from invasive species must be a top priority. We are experiencing a biological crisis and deadly threat to our isolated ecosystem, our natural resources and our economy. A multitude of invaders – such as the little fire ant that can blind animals and destroy nesting birds and hatchlings, the coconut rhinoceros beetle, and parasites attacking coffee crops – graphically illustrate the seriousness of the issue,” Abercrombie said in this year’s State of the State address.

People across the state can easily participate in HISAW online by joining this special “mission” to survey all coconut trees in Hawaii for the Coconut Rhinoceros Beetle. The public is invited to take photos of the crowns of coconut trees and post them to the “Help Save Hawaii’s Coconut Trees” mission on the Project Noah website or via mobile app.   The photos will be reviewed by the Beetle Buster Team from the University of Hawaii Natural Resources and Environmental Management class to assess the presence or absence of this pest across the state.  Adult rhino beetles bore into the crowns of coconut trees to drink the sap, leaving distinctive v-shaped cuts in the leaves when the fronds grow out.  They could kill half the coconut trees in the state, if they aren’t detected and eradicated.  The Beetle Buster Team will flag photos that show suspected beetle damage for follow up surveys.  The project will go live on Monday March 3 – For more information and instructions on how to participate, go to: http://dlnr.hawaii.gov/hisc/hisaw/

Visit the HISAW website at http://dlnr.hawaii.gov/hisc/hisaw/ for a full list of volunteer activities across the state. Opportunities include: