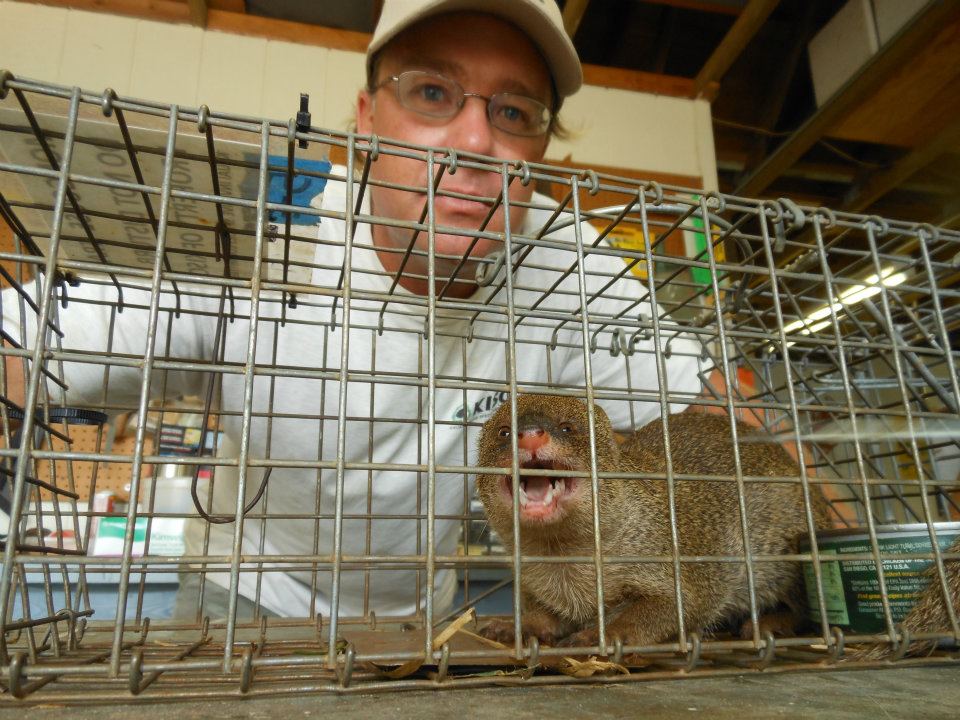 KISC employee Pat Gmelin with the first live mongoose captured on Kauai, in May of 2012. Photo: Keren Gundersen

These captures provided the first concrete evidence of mongoose on Kauai. Whether these mongoose are part of an established population or intermittent introductions remains to be seen. This work highlights the need for enhancements to interisland biosecurity and the need for detection and rapid response of incipient species. Kauai has long been used as a refuge for endangered seabird populations, in part due to its relatively small predator population. The discovery of mongoose on Kaua‘i suggests a threat to ground nesting seabird populations that must be minimized.

Press Release from the Kauai Invasive Species Committee, May 2012:

The first live mongoose to be captured on Kauai was trapped at the Marriott Kauai Lagoons, reported Keren Gundersen, project manager of the Kauai Invasive Species Committee (KISC). Pat Gmelin, KISC Mongoose Response Technician, discovered the mongoose on May 23, 2012 while conducting his daily trap checks.

“I am happy that now it is proven that the mongoose reports are actually confirmed and that my hard work has paid off, but I’m sad to think that Kauai now has a very real threat to our native bird populations,” said Gmelin. “With the help of Bill Bukoski, USDA-Wildlife Services, we determined that the mongoose was a mature male.”

Traps were set in the harbor area after a credible sighting was reported in Niumalu on March 24.  Within 10 days, another nine reports came in that a mongoose had been spotted in the Nawiliwili area, including the Kauai Lagoons and Kauai Marriott Beach Resort. They can range up to 5 miles in a day.

“Thanks to citizens who promptly reported the sighting, we were able to get traps in place rapidly and catch the animal,” Gundersen said. “We really rely on the public to alert us when they see dangerous pests, especially mongoose, because they can quickly leave an area.”

“Kauai is the only island where mongoose were not intentionally introduced, which is why we have been successful in building populations of ground-nesting birds like nene,” said Thomas Kaiakapu, Kauai manager of the state Division of Forestry and Wildlife. “Mongoose eat eggs and chicks, so they can have a devastating affect on wildlife, domestic fowl and game cocks.” 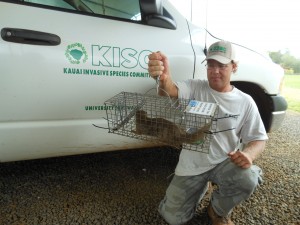 Mongooses were brought to Hawaii by the Sugar Industry in 1883 in a failed attempt to control rats in the sugar cane fields. They prey on turtle eggs, birds and other animals, and they can also carry deadly diseases like leptospirosis. Mongooses have no natural predators in the Islands to keep their numbers in check.

Wildlife managers have long worried that mongoose might get established on Kauai. A lactating female was discovered dead on Kaumualii Highway near Kalaheo in 1976, but none of the invasive animals have been found since then. However, there have been over 160 credible reports of sightings in the last 44 years, with over 70 in the last decade alone.

Sightings have been reported from Mana to Lumahai, including Kokee, with the highest concentration in the Lihue-Puhi area. KISC and DOFAW have been engaged in active trapping and detection efforts in recent years, and the U.S. Department of Agriculture Wildlife Services traps within the airport fence. Rana Biological Consulting Inc., which oversees endangered bird protection at Kauai Lagoons, has been monitoring the resort grounds for avian predators.

Because funding is often spotty for mongoose control, the various entities have been working together, with KISC coordinating the partnerships. The agency currently has a mongoose response technician on staff, so it is taking the lead in following up on sighting reports.

“Catching a live mongoose is a definite game-changer because it increases the likelihood that they are already established here,” Gundersen said. “We are appealing to everyone to call us at 821-1490 and tell us about any encounter they’ve had with a mongoose, even if it is not recent, so we can map historical and current sightings.  That will help us paint a more accurate picture of what the status of mongoose on Kauai might be. We really need to have this information before we can develop a sensible management plan. The most logical and immediate reaction is to beef-up predator control in high-value areas like wildlife refuges and bird sanctuaries.”

The mongoose that was captured has been humanely euthanized.  Further tests will be conducted by field experts to determine its age, possibly its diet and run DNA tests.