Resolution 19-1: Supporting the Use of Science in Herbicide Regulation 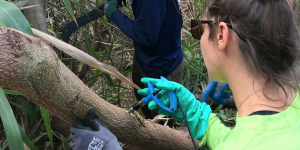 On January 29, 2019, the Hawaii Invasive Species Council adopted a resolution supporting the use of best available science in regulation of herbicides and recognizing the utility of glyphosate as a tool for invasive species control.

Background
Glyphosate is the active ingredient in many herbicide formulations registered in the State of Hawaii to control non-native weed species in many different types of environments. Glyphosate-based herbicides are critical tools in the management of invasive plants in multiple contexts, including control of weeds in natural areas, to protect agricultural resources, and in the creation of firebreaks that limit the spread of wildfires. In 2015, the International Agency for Research on Cancer (IARC) published an evaluation of glyphosate categorizing this chemical as “probably carcinogenic.” The IARC uses this classification when a positive association has been observed between exposure to the agent and cancer but other explanations for the observations, such as chance, could not be ruled out. In 2017, the US Environmental Protection Agency (EPA) evaluated the cancer risk of glyphosate to humans in the Draft Human Health Risk Assessment in Support of Registration Review. The EPA determined that glyphosate was “not likely to be carcinogenic to humans” and supports continuation of current approved use patterns. Glyphosate continues to be approved for use by the EPA and the Hawaii Department of Agriculture.

Discussion
The apparent contradiction between the findings of the IARC report and the EPA evaluation has caused much confusion in the discussion of glyphosate as a chemical tool. The Research and Technology Working Group, an informal group of practitioners that voluntarily meet to discuss invasive species research and technology issues in Hawaii, has produced a position paper that attempts to reconcile these two positions. In particular, the paper highlights that the IARC assessment of “hazard” is made without regard to the context in which a compound is typically used. The EPA assessment of “risk” is made with respect to the context of use, e.g., the likelihood of negative impact to a user when appropriate dosage and protective equipment are used, as described on  the product label. The Research and Technology Working Group paper additionally recognizes that there have been previous attempts to legislate bans or restrictions on the use of glyphosate, in  part relying on the IARC assessment. The working group has adopted a position that future policy discussions relating to glyphosate should be based on scientific evidence and include a careful consideration of hazard versus risk. Reliance on scientific evidence should include utilizing appropriate expertise at the Hawaii Department of Agriculture and the EPA. Such discussions may also benefit from a recognition of the value of this tool, when used appropriately, in the control of invasive plants.

Legal Authority
• HRS 194-2 (a): Establishes the HISC for the purpose of cabinet-level coordination and planning among state departments, federal agencies, and international and local initiatives
• HRS 194-2 (a)(2): Advise, consult, and coordinate invasive species-related efforts with and between the departments of agriculture, land and natural resources, health, and transportation, as well as state, federal, international, and privately organized programs and policies.

Resolution 19-1: Supporting the Use of Best Available Science in Regulation of Herbicides and Recognizing the Utility of Glyphosate as a Tool for Invasive Species Control [Adopted by oral vote 1/29/19, signed version pending]