The eggs of the Ramie Moth (RM)  are clear/white colored, circular (1 mm  diameter), and laid on the underside of leaves. The younger larvae are green and black caterpillars. As they develop they become bright yellow and black with orange-red spots and thin white hairs. The caterpillar evolves into a large  brown and black moth (65-90 mm wingspan). They are often found on or near plants in the nettle family, including Mamaki. 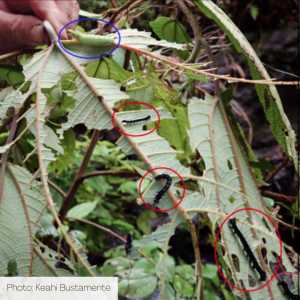 RM caterpillars feed on young and mature leaves of host plants, causing defoliation and severely impacting the plants health. RM are a threat to the native māmaki plant (Pipturus spp.), a culturally and ecologically important plant that stabilizes streambanks and supports numerous native insects, including the Kamehameha butterfly. They also feed on the maʻaloa (Neraudia melastomaefolia), an endangered plant found only in Hawai’i that is on the verge of extinction.

Ramie Moth is native to the Philippines. It is found in Asia, Oceania, Australia, Fiji, and Papa New Guinea. In Hawai’i, it has been found on Maui and Hawai’i Island. Currently, the Ramie moth is not known to be present on any other islands.  Please report sightings of this species if seen on any island. 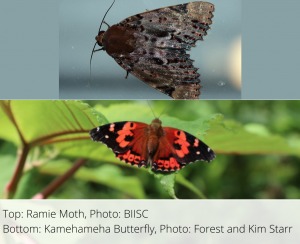 The Kamehameha Butterfly (KB) is Hawaiʻi’s state insect. It’s found on all of the islands, though populations seem to be declining. Māmaki is a host plant for both the KB and the RM. KB caterpillars develop from light green to brown, while RM caterpillars develop from light green with red spots to black. KB caterpillars have thick short spines on their bodies compared to the thin hairs found on RM caterpillars. RM caterpillars are also aggressive- if disturbed, they may lift their heads and move erratically, often vomiting a green fluid.  As adults, the KB is a distinctive bright orange with brown markings on the edge of its wings, while the RM is brown/black.