Regulatory Status: Hawaii Injurious Wildlife (HAR 124). It is prohibited to release Injurious Species into the wild; transport them to islands or locations within the State where they are not already established; and export into or out of the State. 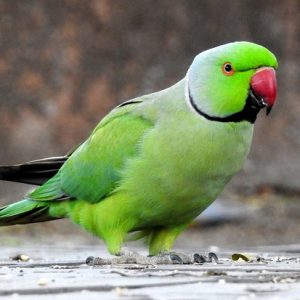 Description: The Rose-ringed Parakeet (RRP) is a vibrant green bird native to the Indian subcontinent. RRP grow to around 16 inches in size, including their long tail feather, and have a 20-30 year lifespan. Both male and females have bright orange beaks, while males have a red and black neck ring. They can also be identified by their distinctive squawking call.

Impacts: RRP are the most successful species of invasive parakeet worldwide. They pose a significant threat to agriculture in Hawai’i. RRP feed are herbivores and feed mainly on fruit and grain, causing damage to valuable food crops throughout the state. On Kaua’i, it has been estimated that RRP have caused an average of 10% in losses for small farms. These birds may also harm native ecosystems by spreading invasive seeds, displacing other native birds, and potentially spreading avian diseases. Their roosting behavior, loud calls, and accumulated droppings are potentially harmful to public health. 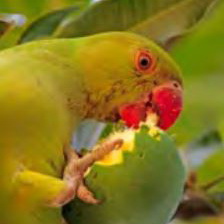 RRP were first brought to the islands as pets in the 1960’s. In 1968, a pair were accidentally released in Kaua’i, and after Hurricane Iwa, several other pet birds escaped and joined the wild population.  Because of their rapid reproduction rate, lack of predators, and abundance of habitat and food, RRP population sky rocketed. RRP are now found on every main island.

A state-funded 2 year project has been implemented to develop a management plan for population-level parakeet control in Kaua’i. Learn more about these actions and what you can do in Kaua’i here and here.