Report this species if seen on Kauai, Oahu, Molokai, or West Maui 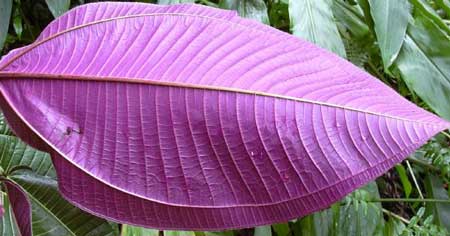 Miconia is a fast growing weedy tree that reaches 13-50′ in height. It has large leaves that average 3′ long and 1′ wide, and are dark green and felty above, with a distinctive “leaf within a leaf” vein pattern. The underside of the leaves are purple. It produces dark purple fruits that are 1/3″ in diameter and contain hundreds of seeds.

Miconia trees grow quickly and close together, shading out nearly all other forest plants with their large oval leaves. It also has a shallow root system and can cause increased erosion and landslides. Miconia quickly matures, producing fruit after three to four years and flowers and fruits several times a year. Plants produce ten to twenty million seeds a year, which can remain viable for twelve years and possibly longer. Birds and animals (such as rats) spread miconia seed long distances. Seeds, about the size of a sand grain, are unintentionally spread by humans and hitchhike on clothes, boots, gear, pets, and contaminated vehicles, equipment, and soil.

Decontamination is extremely important to reduce the risk of spreading miconia. Hikers, biker and any vehicle or construction equipment can easily transport miconia’s long-lived, tiny seeds that are caught in tread, dirt, clothing, and mud.