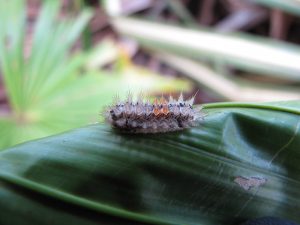 Biocontrol of weeds has been practiced with great success for over a century in Hawaiʻi and around the world. There are records of hundreds of successful releases of biocontrol agents throughout the world, dating back to the late 1800s. The first record of biocontrol released in Hawaiʻi was in 1902 when insects and diseases of lantana (Lantana camara) were brought to the state from Mexico.

Saving wiliwili: biocontrol to the rescue 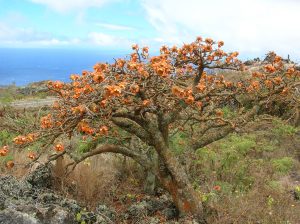 In 2005, the Erythrina gall wasp (EGW) hitched a ride to Hawaiʻi through cargo, and within months was killing Wiliwili trees across the state and leaving the endemic Wiliwili threatened with extinction. With chemical control expensive and minimally effective, HDOA sent an exploratory entomologist to Africa in search of a solution. The most promising answer was a tiny parasitic wasp, a natural enemy of EGW. The wasp, Eurytoma erythrinae, was brought back to a containment facility in Hawaiʻi for testing. Following years of rigorous host specificity testing, the parasitic wasp was approved for release in 2008. The success following release was quick, and the Wiliwili tree has made a notable comeback thanks to the application of biocontrol. The Division of Forestry and Wildlife and HDOA are currently working towards the introduction of a second agent targeting EGW to augment the success of the first release.