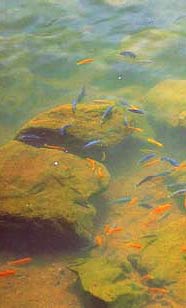 At least two dozen fish and invertebrate species imported through the aquarium fish trade have become established in Hawaiian freshwater streams and reservoirs after escape (release) from confinement. These have disrupted both stream and reservoir ecosystems, have severely impaired recreational fisheries, and have contributed to declines in endemic stream species populations. Parasites introduced with and maintained by these escapees are seriously impacting native stream fishes.

The rate of introductions has been effectively slowed during the 1990s through an extensive public education campaign warning against the release of aquarium fish into the wild including television advertising, poster distribution, and public school presentations; a cooperative arrangement with pet shops and the Humane Society to accept unwanted pet fish; and legislation that prohibits the release of alien fish in State waters. Measures need to be taken to halt spread of non-natives to the neighbor islands, to curb further unplanned introductions to all Hawaiian waters, and to effect eradication where possible, although by the time a new species is recognized, it is usually already too well established for eradication and has become a permanent addition to the Hawaiian biota, with probable harmful consequences for the native species. Public education in the prevention of alien introductions needs to continue.