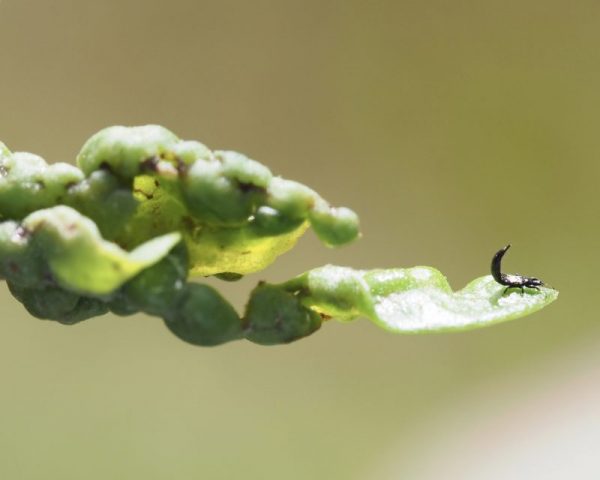 Entomologists from the Hawai‘i Dept. of Agriculture (HDOA) confirmed that the tiny insect is the Myoporum thrips, an invasive species which has devastated naio forests on Hawai‘i island. This was the first detection ever on O‘ahu. Naio is an important part of O‘ahu’s coastal ecosystems and are popular as ornamentals in landscaping.

Of the 619 plants surveyed, only 42 showed signs of Myoporum thrips at ten different locations around O‘ahu. Seven locations have been treated which includes cutting down infested trees, spraying them with insect killing soap, tarping them, and then disposing them away from the property. Yesterday, DOFAW and OISC crews with the help from a couple of university interns finished removing 10 trees from the Honolulu Forest Reserve in the Moanalua area.

This rapid response coupled with help from people who grow naio will hopefully prevent further spread.  The O‘ahu Invasive Species Committee is asking for anyone who knows about naio growing anywhere on the island to report it. GPS points and photographs are very helpful. Additionally, they’re looking for people willing to adopt trees and check them periodically for the presence of thrips. The insects are narrow, dark brown to black and approximately 2-2.5 mm in size.  Damage on the plant is likely to be more visible than the thrips themselves.

To volunteer to monitor:
[email protected]