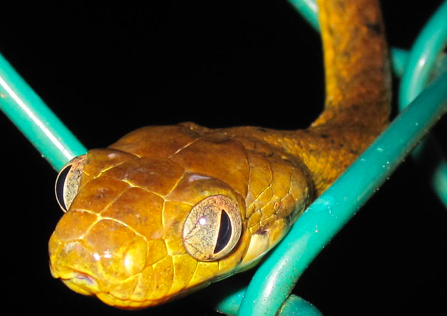 Brown tree snake has heavily invaded Guam, but so far has not established in Hawaii

It is important to note that not all nonnative species are considered invasive, only those that cause environmental or economic harm, or harm to human health. Currently there is no official State designation for invasive species in Hawaii, though the interagency Hawaii Invasive Species Council is in the process of developing administrative rules to do so. Due to the prevalence of invasive species as an environmental concern, many of DLNR’s projects include components relevant to invasive species issues. For example, DOFAW’s Native Ecosystems Protection and Management Program and DLNR’s Rain Follows the Forest watershed initiative aim to protect watershed functions in part by managing invasive ungulates in certain areas. DOFAW’s Forestry Program manages projects that control invasive species and restore native forest species. Within DOFAW’s Wildlife Program, invasive species staff coordinate a number of projects, including:

• What are invasive species?