Hawaiʻi, unlike any other state in the U.S., was originally a sovereign nation – a kingdom. There were certain preexisting laws that were passed on and incorporated into what became laws of the U.S. Territory, and then ultimately, of the State. In relation to trails, the following two citations describe the legal tools used by the Nā Ala Hele Program to identify and possibly claim public ownership of specific features. 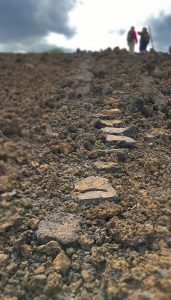 In October of 1892, Queen Liliuokalani approved law that determined that the ownership of all public highways and the land, real estate and property of the same, shall be in the Hawaiian Government in fee simple. The definition of public highway includes all existing trails at the time “or hereafter opened, laid out or built by the Government, or by private parties, and dedicated or abandoned to the public as a highway, are hereby declared to be public highways.” Furthermore, “All public highways once established shall continue until abandoned by due process of law”.

The following HRS furthers the intent of the Highways Act:

All trails, and other nonvehicular rights-of-way in the State declared to be public rights-of-way by the Highways Act of 1892, or opened, laid out, or built by the government or otherwise created or vested as nonvehicular public rights of way at any time hereafter, or in the future, are declared to be public trails. A public trail is under the jurisdiction of the State Board of Land and Natural Resources – unless it was created by or dedicated to a particular county, in which case it shall be under the jurisdiction of that county. All State trails once established shall continue until lawfully disposed of pursuant to Chapter 171, HRS.Ch 264-1(b), Hawaiʻi Revised Statutes

If the State can document the existence of a trail prior to 1892, and the feature has not been disposed of pursuant to Chapter 171, the State may claim the trail. This applies even if the trail does not currently exist on the ground physically – in many instances trail sections have been destroyed over time due to various land uses or natural process.

The documents below provide additional information on Hawaiʻi’s ancient and historic trails.