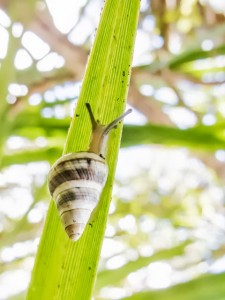 In early 2013, one of the last known populations of Hawaiian tree snails in the wild on Oahu was rapidly declining due to disastrous levels of predation by rats. DLNR’s Snail Extinction Prevention Program (SEPP) staff, with help from the Oahu Army Natural Resource Program, DLNR’s Natural Area Reserve System, the U.S. Fish and Wildlife Service, and the University of Hawaii Hawaiian Tree Snail Conservation Lab, took a proactive step to extract the entire snail population of 24 snails until they could be safely returned to protected habitat.

They were later returned deep within the Honouliuli Forest Reserve and placed in a newly constructed exclosure structure designed to keep out rats, the cannibal rosy wolf snails, and chameleons.