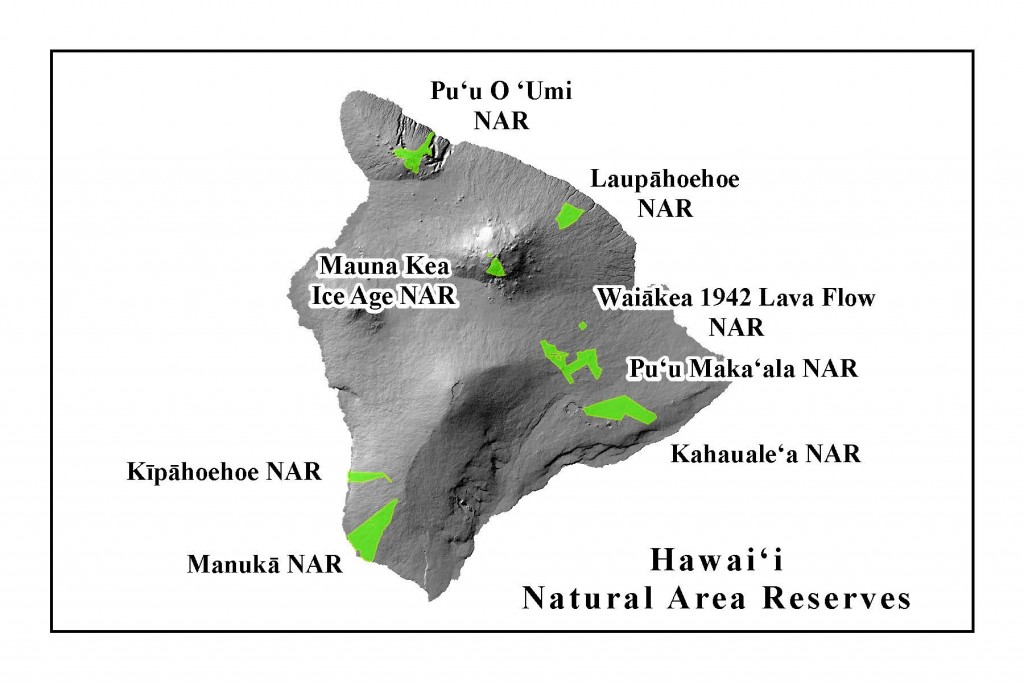 Kahauale‘a Kahauale‘a can be found on the gentle slopes of Kilauea; site of much recent volcanic activity. Montane and lowland wet forests, a lowland mesic forest, and successional communities are represented. The largest population of Adenophorus periens, an endangered fern, is found in Kahauale‘a.

Manuka is the largest reserve in the State’s system. Extending from sea level to 5,000 feet elevation, it features a broad range of habitats, including: subalpine shrublands and forests, mesic montane kipuka forests, wet montane forests, lowland mesic and dry forests, and lava anchialine pools. Concentrations of the Hawaiian hoary bat can sometimes be seen from the trail that winds through the reserve.

Mauna Kea Ice Age Located in the upper, southern flank of Mauna Kea, this reserve contains a rare alpine aeolian desert and the only alpine lake in Hawai‘i. Rare native invertebrates and evidence of Pleistocene glaciation can be found. The area also contains important cultural resources as it was once a Hawaiian adze quarry site.

Waiakea 1942 Lava Flow This reserve provides an example of a recent lava flow being colonized by ‘ohi‘a. Other successional communities in a montane wet ‘ohi‘a forest ecosystem are also represented. This reserve is located on the sloping northeast flank of Mauna Kea.