Five changes, including four additions totaling roughly 8,167 acres and one withdrawal of about 2.7 acres, are being proposed for the State Forest Reserve System. The State Forest Reserve System is managed by the DLNR Division of Forest and Wildlife (DOFAW) to provide a variety of benefits to the public including aesthetic benefits; watershed restoration; native, threatened, and endangered species habitat protection and management; cultural resources; and recreational and hunting opportunities among others. DOFAW will hold a virtual hearing at 6:00pm on April 28, 2021, to receive public testimony on the proposed changes. 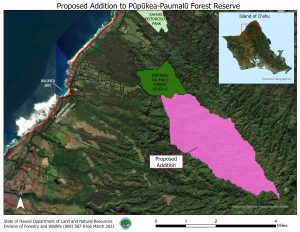 One proposed addition is located on the North Shore of the island of Oʻahu. In late 2019, the State acquired approximately 3,716 acres of land in the back of Waimea Valley from the Dole corporation for addition to the Pūpūkea-Paumalū Forest Reserve. The property contains high priority watersheds, including the headwaters of the Kamananui and ʻElehāhā Streams and native ecosystems that provide habitat for endangered wildlife and plants. 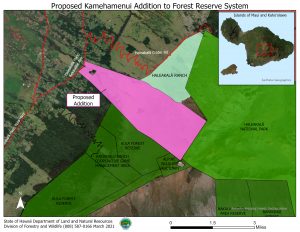 The second proposed addition is located on the island of Maui on the north slopes of Haleakalā. In 2020, the State acquired approximately 3,433 acres in the ahupuaʻa of Kamehamenui for addition to the Forest Reserve System. Kamehamenui is located between Kula Forest Reserve and Haleakalā National Park, and its protection is critical to achieve the overarching goal to restore the “mauna lei”, the band of forest that once encompassed Haleakalā. Restoring this contiguous lei of habitat around the mountain will ensure biological connectivity and restore ecological services. The parcel will also provide additional public access from Kekaulike Avenue to this popular recreational area. 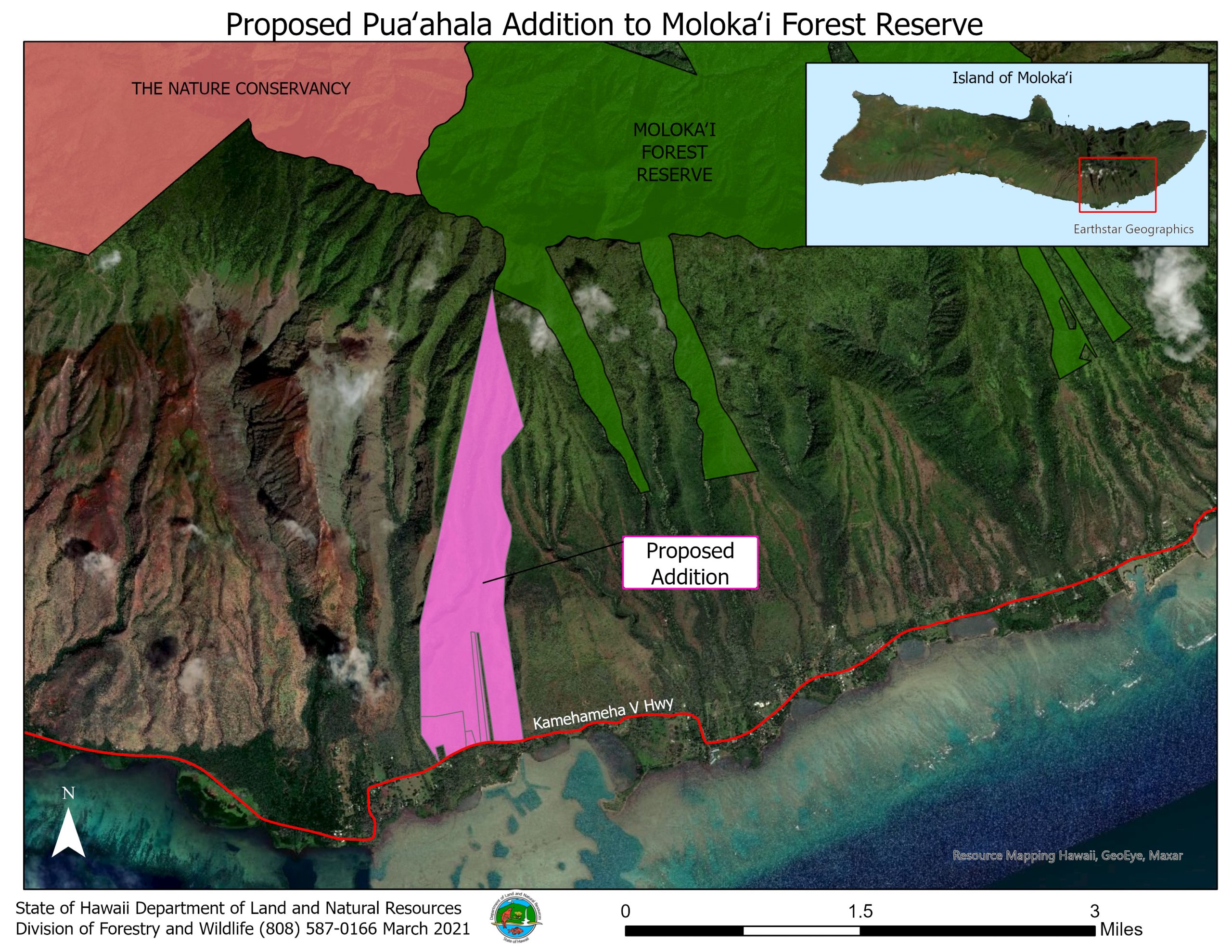 The third proposed addition in located in southeast Molokaʻi and is comprised of approximately 800 acres in the ahupuaʻa of Puaʻahala.  It was acquired in 2020 for addition to Molokaʻi Forest Reserve and it contains some of the most pristine forests remaining in the area. This acquistion was also important for completing the Pāku’i watershed protection project, part of a larger effort with community support to fence and protect vital watersheds on Molokaʻi. The midslope areas contain roadways and infrastructure that can be used to create fuel breaks and help contain wildfires in the area.  Section makai of the forest reserve and the highway will be designated as wildlife sanctuary, representing an entire protected ahupuaʻa. 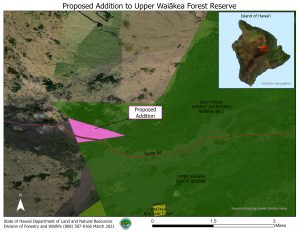 The fourth proposed addition is approximately 216 acres of State land located in Upper Waiākea on the island of Hawaiʻi. The area historically had been encumbered by state pasture leases, and upon their expiry in the early 1990s DOFAW assumed management of the area. At the time it was thought that the area was part of the Upper Waiākea Forest Reserve. Closer examination of encumbrance documentation revealed that the area was actually excluded from the Governor’s Proclamation dated January 3, 1923, that set the current boundary of the forest reserve. DOFAW is proposing to add the area to the Upper Waiākea Forest Reserve to formalize its jurisdiction of the area. 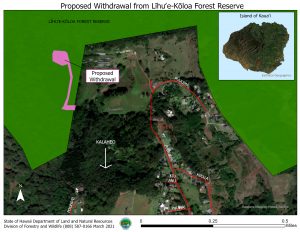 The only proposed withdrawal is located near Kalaheo, Kauaʻi and would remove approximately 2.75 acres from the Līhuʻe-Kōloa Forest Reserve.  The land will be set-aside to the County of Kauaʻi Department of Water to repair, upgrade, or replace its aging water system equipment at this location. This is needed to meet maximum day demand storage capacity and fire flow requirements for current and future demand in the Kalaheo-Lawa’i-‘Oma’o Water Service Area.

To watch: visit the following link at 6:00pm on April 28, 2021: www.youtube.com/channel/UCCmbChq0SDC4zjjU0bUcKDQ.

To testify: please contact Andy Cullison at [email protected] least 24 hours before the hearing to receive a zoom link.

Anyone may testify or present information at the open hearing. People unable to attend or who want to present additional comments may mail written testimony received no later than May 6, 2021 to the Division of Forestry and Wildlife, Attn: Forestry Program Manager, 1151 Punchbowl St., Rm. 325, Honolulu HI, 96813, or via the email listed above. If you require auxiliary aids (taped materials or sign language interpreter), please request assistance 10 working days prior to the date of the hearing by calling (808) 436-8122.