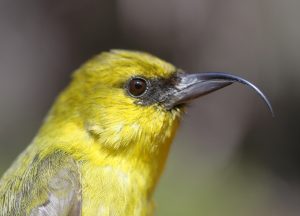 The ‘akiapōlā‘au is a stocky Hawaiian honeycreeper (Family: Fringillidae) endemic to the island of Hawai‘i and most famous for their specialized bills, which have a long, decurved upper mandible and a short woodpecker-like lower mandible. Adult males have a bright yellow head and underparts, yellow-green back and wings, and a small, black mask. Adult females are olive above with grayish-yellow to yellow underparts. Males are larger than females and have longer bills. They often join hunting parties made up of several specie; which vary depending on habitat. ‘Akiapōlā‘au are mainly insectivorous, with Lepidoptera larva, spiders, and beetle larva being the most important prey items. It rarely takes nectar but takes sap from holes it excavates in ‘ōhi‘a (Metrosideros polymorpha) trees. Most frequently, creeps along lichen covered and dead branches of koa (Acacia koa), kōlea (Myrsine lessertiana), māmane (Sophora chrysophylla), and naio (Myoporum sandwicense) trees tapping branches with their lower mandible to locate prey. Once a food item is located, lower mandible is used similar to that of a woodpecker bill to chisel open a hole. The upper mandible is then used to fish out the prey item. Upper mandible also used to examine natural cracks and crevices. Breeding has been documented year-round, although most activity occurs from February to July. The species’ open cup nest is most often placed in ‘ōhi‘a trees. They usually lay one, rarely two, eggs and females perform all incubation and brooding. Males provide females and nestlings with the majority of food. Only one fledgling is produced per year, and a long period of parental dependency, usually four to five months, is typical. Family groups consisting of newly born and one year old chicks have been observed. This species is characterized by low annual productivity.

Occurs in three disjunct populations between 1,500 and 2,000 meters (4,875–6,500 feet) elevation on the Island of Hawai‘i. Original range likely included all forested areas of the island.

Occurs in mesic and wet montane forests dominated by koa and ‘ōhi‘a. The small and declining population on Mauna Kea occurred in subalpine dry forest dominated by māmane and naio. A recent study documented ‘akiapōlā‘au occurring entirely in areas reforested with koa (i.e., second-growth, young forests). Habitat quality varies across the species’ occupied range. Most remaining populations occur on lands managed by the State of Hawai‘i and the U.S. Fish and Wildlife Service.

‘Akiapōlā‘au are likely susceptible to the same factors that threaten other native Hawaiian forest birds, including habitat loss and degradation, predation by introduced mammals, and disease. For ‘akiapōlā‘au populations, the following are of particular concern: 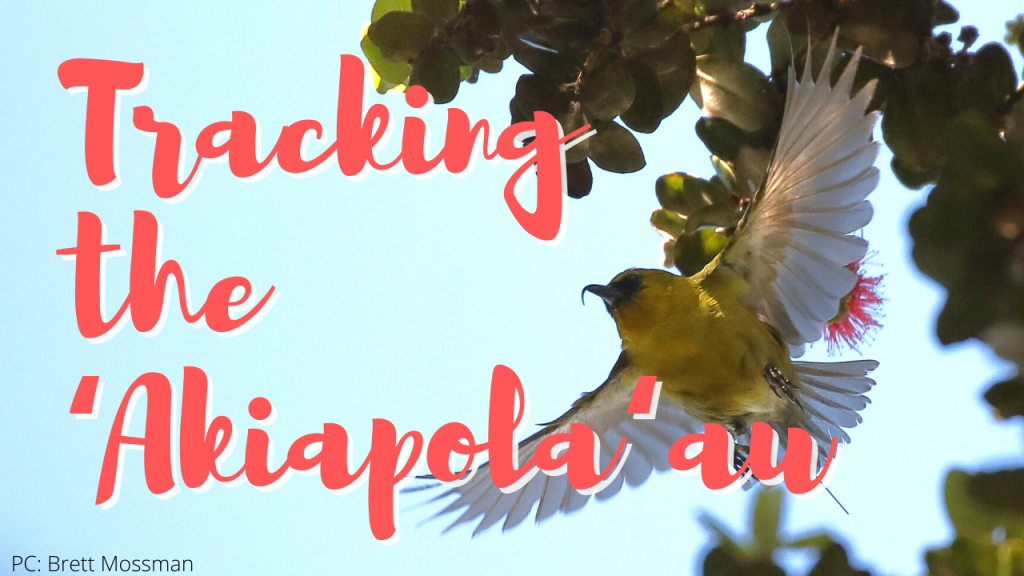 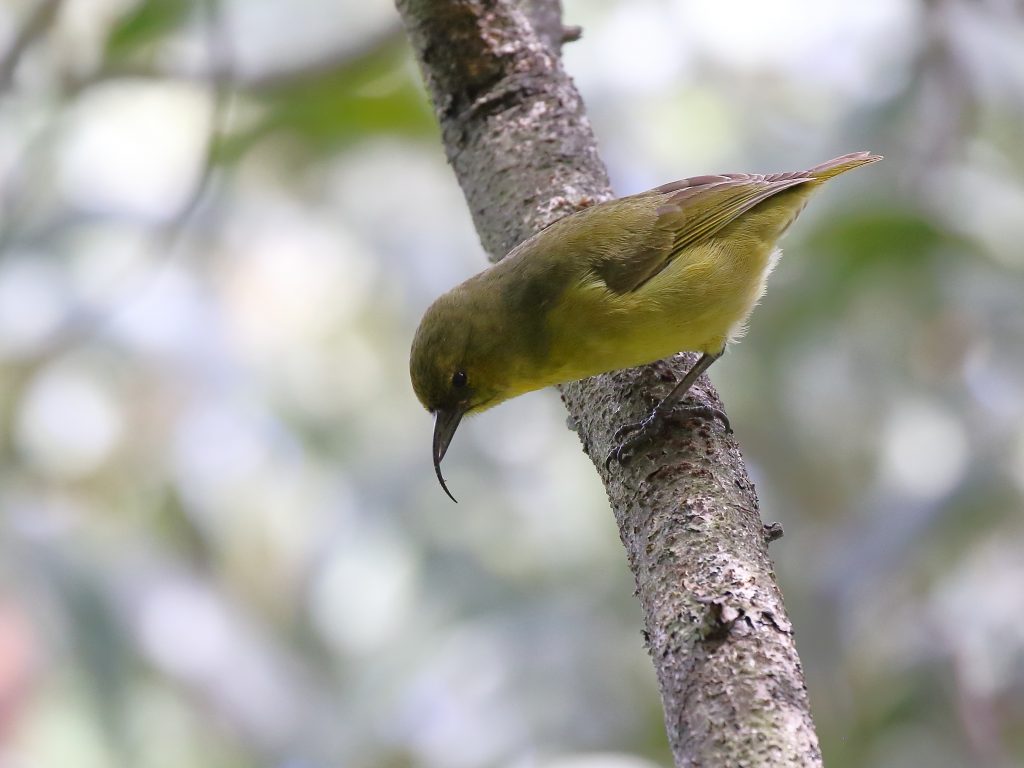 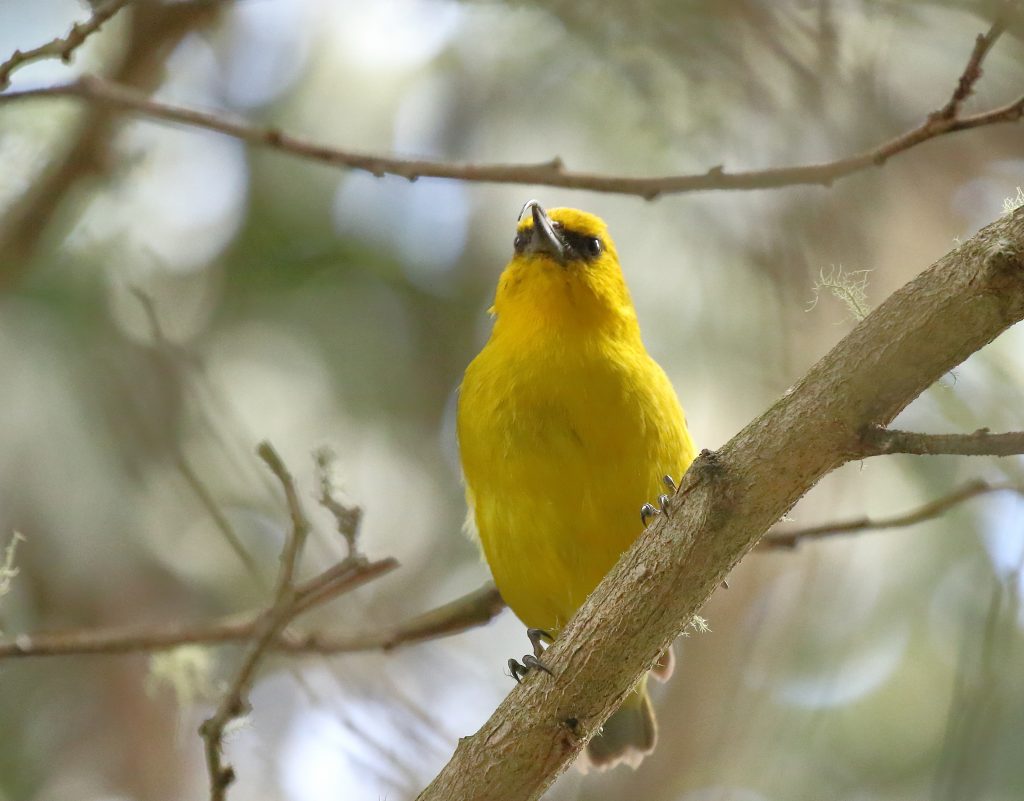 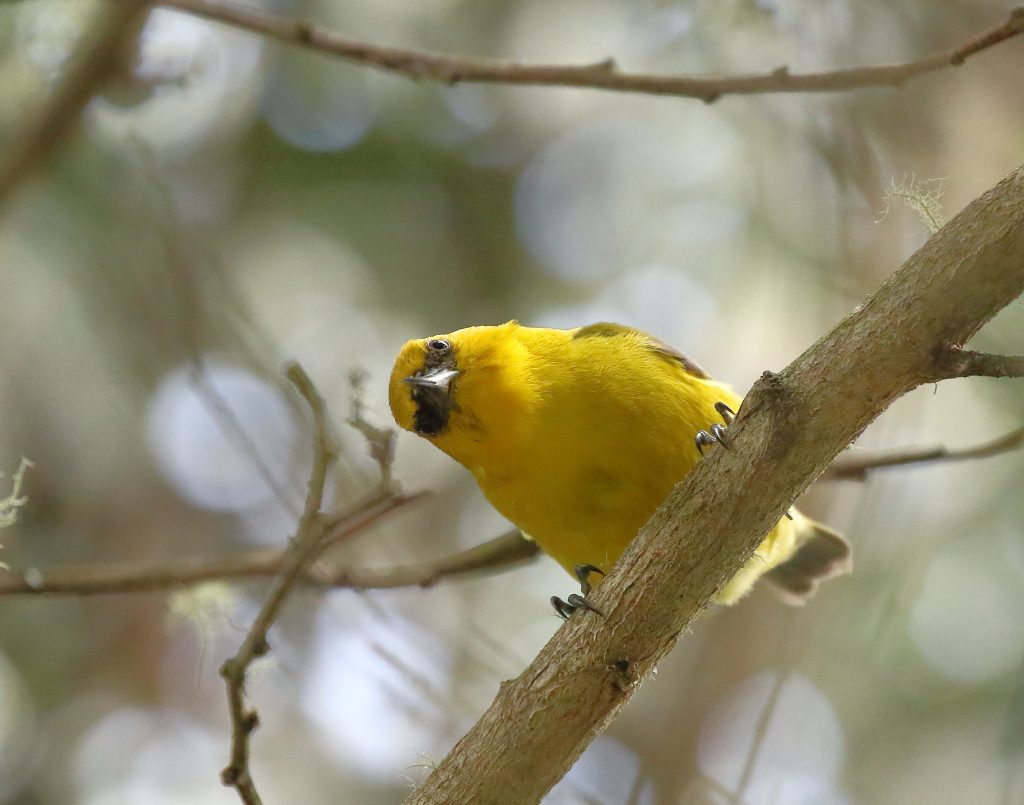 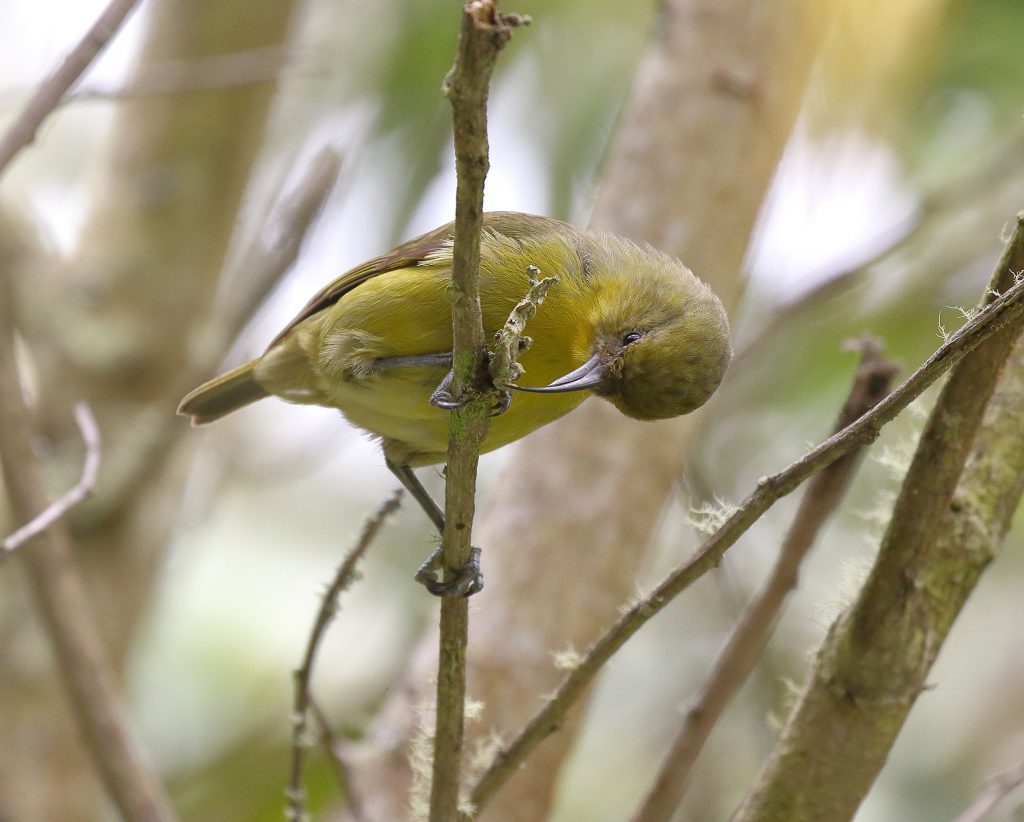 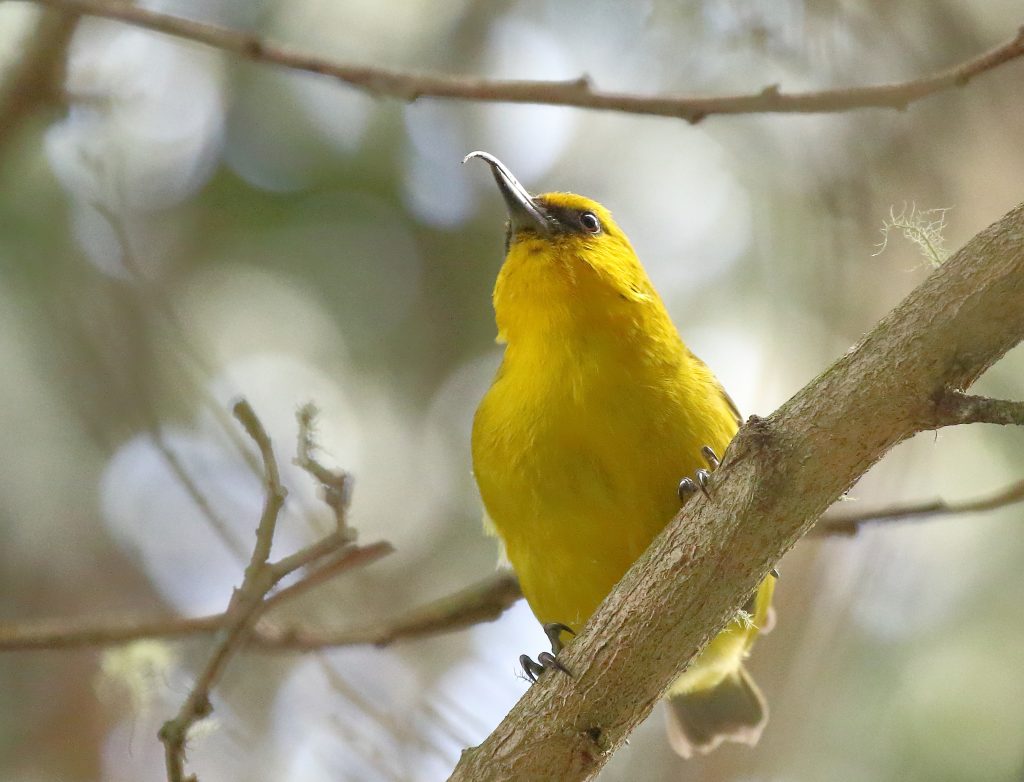 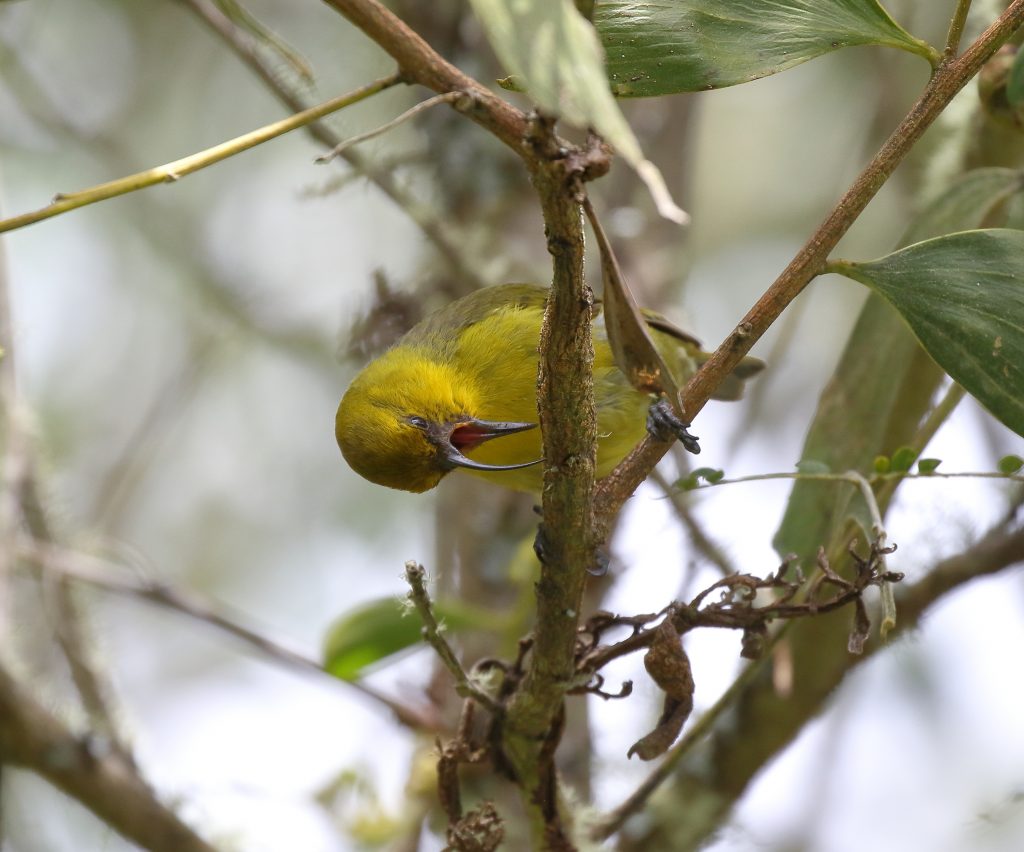 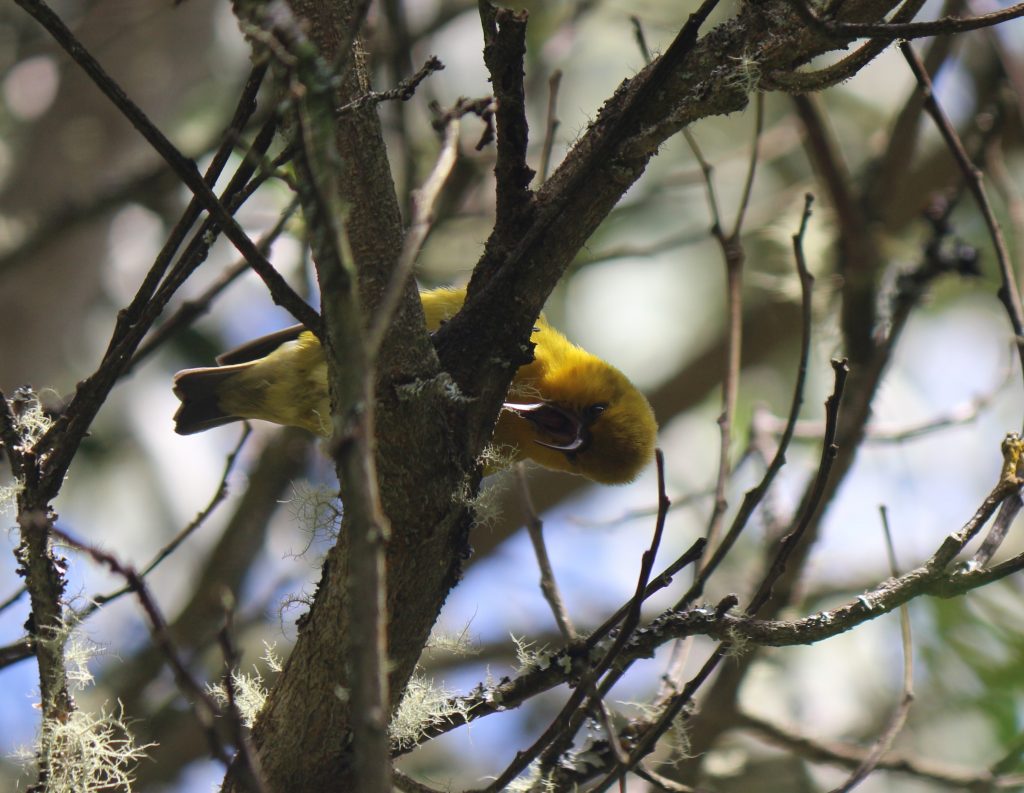