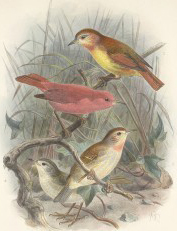 The kākāwahie, or Moloka‘i creeper, is a small and insectivorous Hawaiian honeycreeper (Family: Fringillidae) endemic to the forests of eastern Moloka‘i. Males are scarlet red; females are a dull rusty color. The species’ Hawaiian name translates as “woodchopping” and apparently describes the species chipping call. Kākāwahie forage in groups, gleaning invertebrates from leaves, bark, and epiphytes in wet ‘ōhi‘a (Metrosideros polymorpha) forests. Little is known about the species’ breeding biology, but it is assumed to be similar to that of the Maui creeper (P. montana). First described in 1889, the last bird was observed less than 100 years later.

Unknown. Probably extinct. Last observed on the west rim of Pelekunu Valley. Kākāwahie were common in native forests of eastern Moloka‘i at the end of the 19th century. Original range likely included all forested regions of Moloka‘i.

Unknown. Was known to occur in wet ‘ōhi‘a (Metrosideros polymorpha) forests from low to high elevations, and other heavily wooded native areas of eastern Moloka‘i. The areas where the species was last observed are managed by the State as Natural Area Reserves or by The Nature Conservancy.

Unknown. However, kākāwahie likely were susceptible to the same factors that threaten other native Hawaiian forest birds, including habitat loss and degradation, predation by introduced mammals, and disease. For kākāwahie, the following likely was of particular concern: