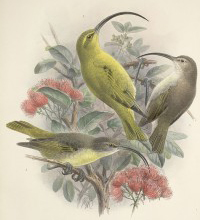 The Kaua‘i ‘akialoa is perhaps the most morphologically specialized of the Hawaiian honeycreepers (Family: Fringillidae) having a decurved bill that is up to half the length of their body. Both sexes are mostly olive-green; males being somewhat brighter, slightly larger, and have a longer bill. The life history of the Kaua‘i ‘akialoa is poorly known and mostly based on observations from the turn of the last century. The species principally hunted for arthropods on the trunks and branches of ‘ōhi‘a (Metrosideros polymorpha) and koa (Acacia koa) trees, and hapu‘u tree ferns (Cibotium spp.) by using its bill to examine bark cervices, decaying wood, epiphytes, and organic matter; observed to insert its entire bill into crevices. Foraging behavior has been described as being similar to that of a woodpecker or creeper. They also took nectar from ‘ōhi‘a and lobelia (Campanulaceae) flowers. Nothing is known about its breeding biology. ‘Akialoa also occurred on the islands of Hawai‘i, O‘ahu, and Lāna‘i. Some scientists consider each island population as a separate species, others lump all into a single, polytypic species. Regardless, none have been observed for at least 60 years.

Causes of the decline of this species are unknown. However, ‘akialoa likely were susceptible to the same factors that threaten other native Hawaiian forest birds, including loss and degradation of habitat, predation by introduced mammals, and disease. For Kaua‘i ‘akialoa populations, the following likely was of particular concern: