The Kaua‘i ‘elepaio is a small, adaptable monarch flycatcher (Family: Monarchiade) endemic to the island of Kaua‘i. ‘Elepaio also occur on the islands of Hawai‘i (C. s. sandwichensis) and O‘ahu (C. s. ibidis); both are Federally-listed as endangered. Adult males and females have a dark grayish brown crown and back and white underparts with a rusty wash on the upper breast. The bird’s name is derived from its primary song which is a shrill whistle given only by males. Little detailed life history information is available from Kaua‘i. On the islands of Hawai‘i and O‘ahu, ‘elepaio use virtually all available substrates when searching for their food (a.k.a foraging), including the ground, logs, rock crevices, snags, and all parts of trees. They capture a wide range of arthropod prey by flycatching, gleaning while perched or hovering, and direct pursuit. The way they search for their food varies depending on plant species from which prey is being captured and habitat type. For Kaua‘i, there is no information on plant species used, although ‘ōhi‘a (Metrodiseros polymorpha) is likely. On the island of Hawai‘i, pairs remain together throughout the year and long-term pair bonds are common. Unlike Hawaiian honeycreepers, both males and females participate almost equally in all aspects of caring for their chicks. Finely woven, cup nests are built in a variety of native and non-native trees. The number of eggs released is usually two and second nests are attempted, often while newly-flying birds from the first nest are still being fed. Youngs are fed by parents for at least a month but remain on their natal territory for up to ten months, which may allow young birds to perfect their foraging skills.

Most common in dense wet ‘ōhi‘a forests above 1,100 meters (3,600 feet) elevation; uncommon in the drier forests of Waimea Canyon, the Nā Pali coast, and the wet bogs of Wai‘ale‘ale. ‘Elepaio are found in some low elevation valleys with a mix of native and non-native tree species. Common non-native trees in this habitat include Java plum (Syzygium cumini), coffee (Coffea arabica), kukui (Aleurites moluccana), and Albizia lebbeck. Habitat quality varies considerably. The core of their range, the Alaka‘i Plateau and Kōke‘e State Park, is managed by the State of Hawai‘i as Forest Reserve, Wilderness Preserve, and State Park lands.

Kaua‘i ‘elepaio are likely susceptible to the same factors that threaten other native Hawaiian forest birds, including loss and degradation of habitat, predation by introduced mammals, and disease. For Kaua‘i ‘elepaio, the following are of particular concern: 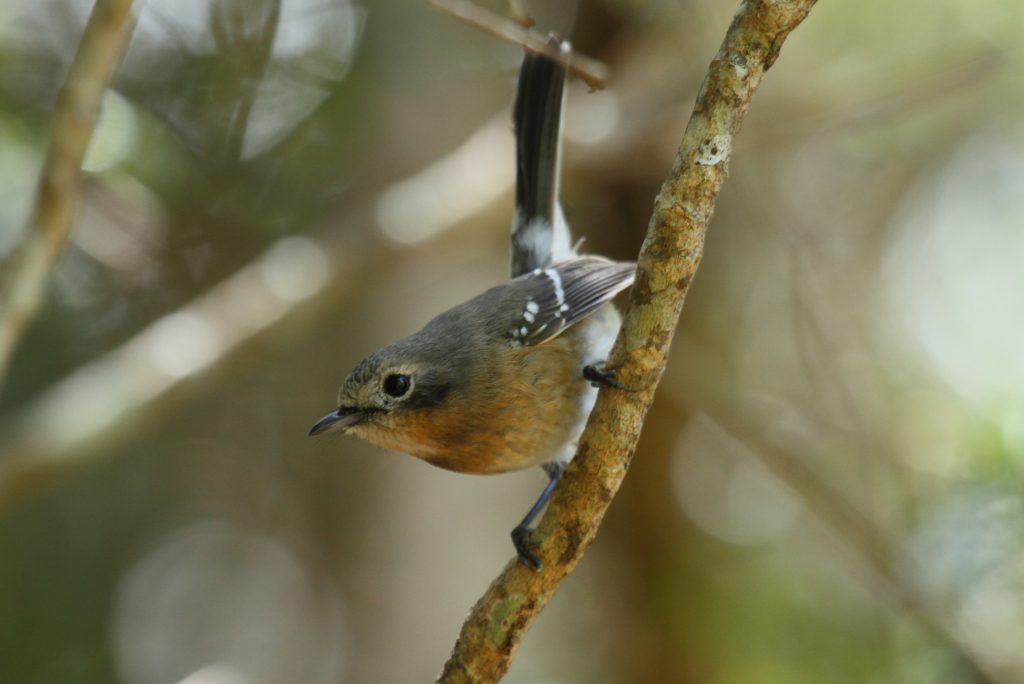