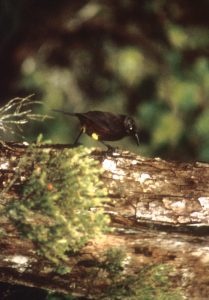 Endemic to its namesake, the Kaua‘i ‘ō‘ō is the smallest of the five known species of Hawaiian honeyeaters (Family: Meliphagidae), and has the least showy plumage of the four Hawaiian species of Moho. ‘Ō‘ō eat a variety of arthropods, snails, ‘ōlapa (Cheirodendron spp.) fruits, and nectar from the flowers of ‘ōhi‘a (Metrosideros polymorpha), lobelia, as well as other species. Early naturalists reported the species extensively feeding on the flower bracts of ‘ie‘ie (Freycinetia arborea), a species abundant in lowland forests, but not in upper elevation forests. Little is known about the species’ breeding biology. The only known nests were in cavities in large ‘ōhi‘a snags.

Unknown. Possibly extinct. Was last observed in stream valleys of the central Alaka‘i Wilderness Preserve. Historically, the Kaua‘i ‘ō‘ō occurred in forest habitat throughout the island.

Unknown. The last sightings were in dense ‘ōhi‘a forests of the Alaka‘i swamp. Ironically, this habitat may have been low-quality or marginal habitat. ‘Ie‘ie, an important food plant, common in the lower elevation forests previously occupied by ‘ō‘ō, is not found in the upper elevations forests where the species was last observed. Extensive damage to forests by hurricanes in 1982 and 1992 may have further reduced the suitability of high-elevation forests, especially given the species’ apparent dependence on large snags for nest sites. The area where the species was last observed is managed by the State of Hawai‘i as a Wilderness Preserve.

Unknown. However, the species was likely susceptible to the same factors that threaten other native Hawaiian forest birds, including loss and degradation of habitat, predation by introduced mammals, and disease. For Kaua‘i ‘ō‘ō, the following likely were of particular concern: