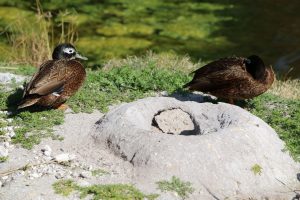 The Laysan duck is a small dabbling duck (Family: Anatidae) endemic to Hawai‘i, and until recently was restricted to Laysan Island (370 hectares, or 911 acres) in the Northwestern Hawaiian Islands (NWHI). Even after recent successful translocation efforts to establish new populations on Midway and Kure Atolls, the species still has one of the smallest geographic ranges of any duck. Adults are dark brown overall with a prominent white eye-ring and varying amounts of white feathers on the head and neck; the sexes are similar. Unlike many other duck species, Laysan ducks have low fecundity and are nocturnal, very terrestrial, and highly sedentary; the species also is relatively long-lived. During the day, ducks take cover under vegetation such as bunchgrass or shrub. Individuals forage mainly at night around and in a large hypersaline lake, feeding primarily on the larvae and pupae of Dipteran brine flies and adult Dipteran brine flies, the larvae and pupae of a noctuid moth, and brine shrimp. Seeds, leaves, algae, and other invertebrates also are eaten. In the most common method of foraging, the Laysan duck runs through swarms of adult brine flies while moving its head back and forth, snapping up flies. Moth larvae and pupae are taken by “filter feeding” in sand under low vegetation. The species also dabbles along the lake shore. Long-term pair bonds are not formed, and males do not participate in brood-rearing. Nesting occurs between February and November, although most eggs are laid between April and August. Nests are well concealed and typically are placed at the base of dense vegetation, especially bunch grass. Nests are shallow scrapes lined with dead grass and some down. Typically three to five eggs are laid, and they hatch after 28 days. Ducklings are precocial (when hatched they have the ability to move and feed independently) and are not fed by the female. Because the species evolved with avian predators, when surprised, individuals tend to walk away rather than fly and freeze rather than flush.

The Laysan duck currently occurs only on Laysan Island, Midway Atoll, and Kure Atoll in the NWHI; the population on Midway Atoll was a result of a successful translocation effort that occurred in 2004–2005. This success enabled 28 young adult birds to be relocated from Midway to Kure Atoll in 2013 which has greatly facilitated the reintroduction effort. Fossil and subfossil evidence indicates that Laysan ducks were widespread in the NWHI and Main Hawaiian Islands (MHI) prior to the arrival of Polynesians and occurred on the islands of Hawai‘i, Moloka‘i, O‘ahu, Maui, and Kaua‘i. Laysan ducks were extant on Lisianski as late as 1844.

Two habitats are critical to the survival of Laysan duck: vegetated uplands and wetlands. Uplands supporting vegetation such as beach naupaka and bunch grass provide ducks with shelter and nesting habitat, and hypersaline lakes provide important foraging habitat. The importance of upland vegetation was demonstrated by the severe decline of ducks at the turn of the last century, when rabbits denuded Laysan, and by the species’ subsequent recovery after the rabbit population was eradicated in the 1920s and the vegetation recovered. Similarly, the number of ducks varies considerably depending on lake water levels; in 1987, there was a total breeding failure due to a drought and a lack of brine flies.

Historical threats included the introduction of rabbits, which subsequently denuded the island’s vegetation (see above), sport hunting, and guano mining. The species’ limited population size and geographic range exacerbates the risk of extinction from demographic and environmental stochasticity and catastrophes. These threats include: 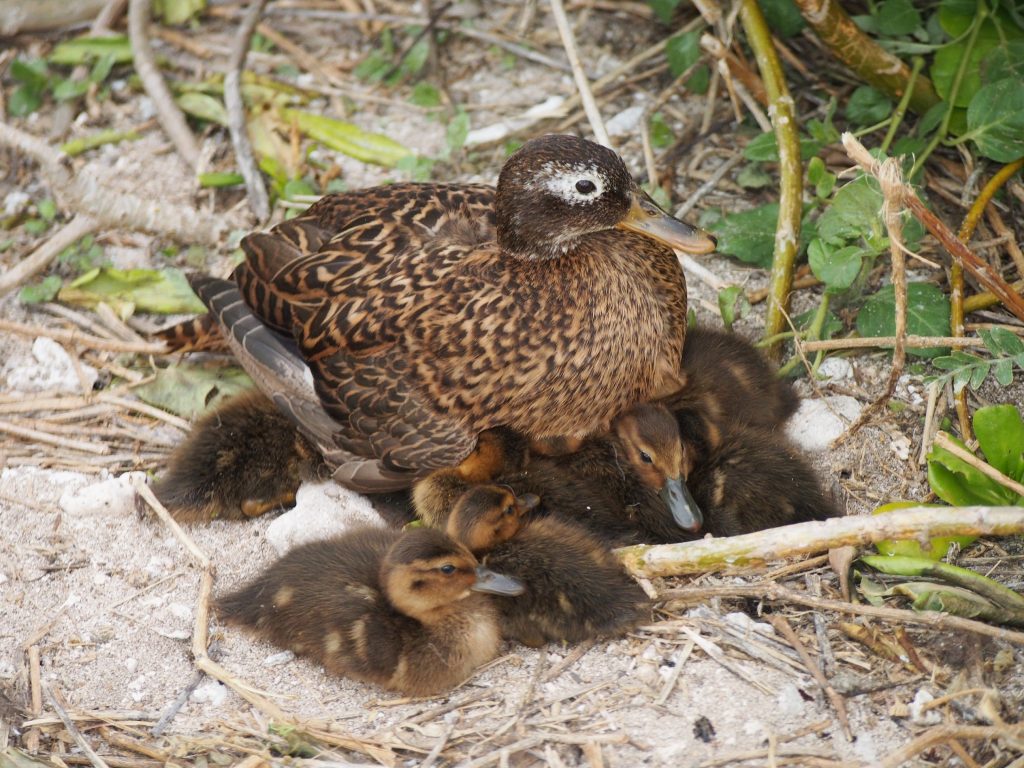 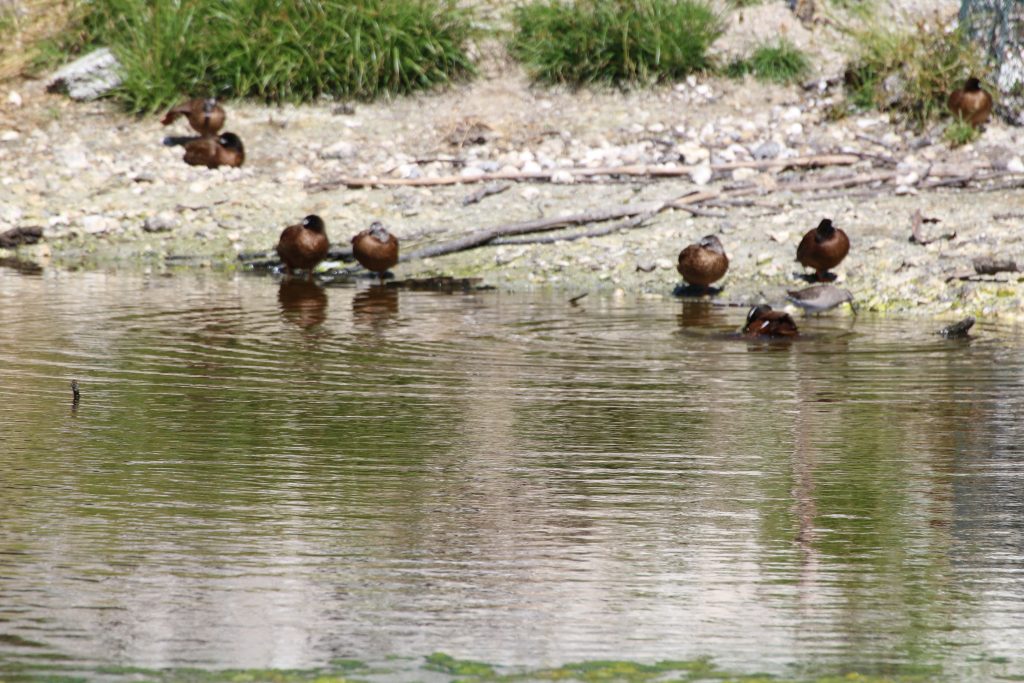 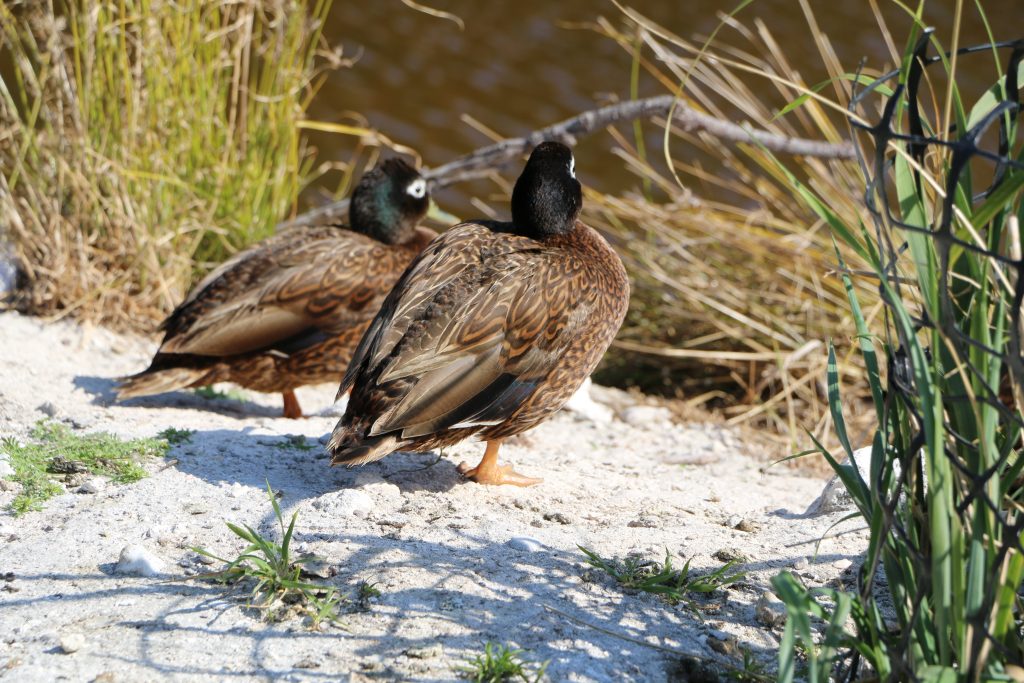 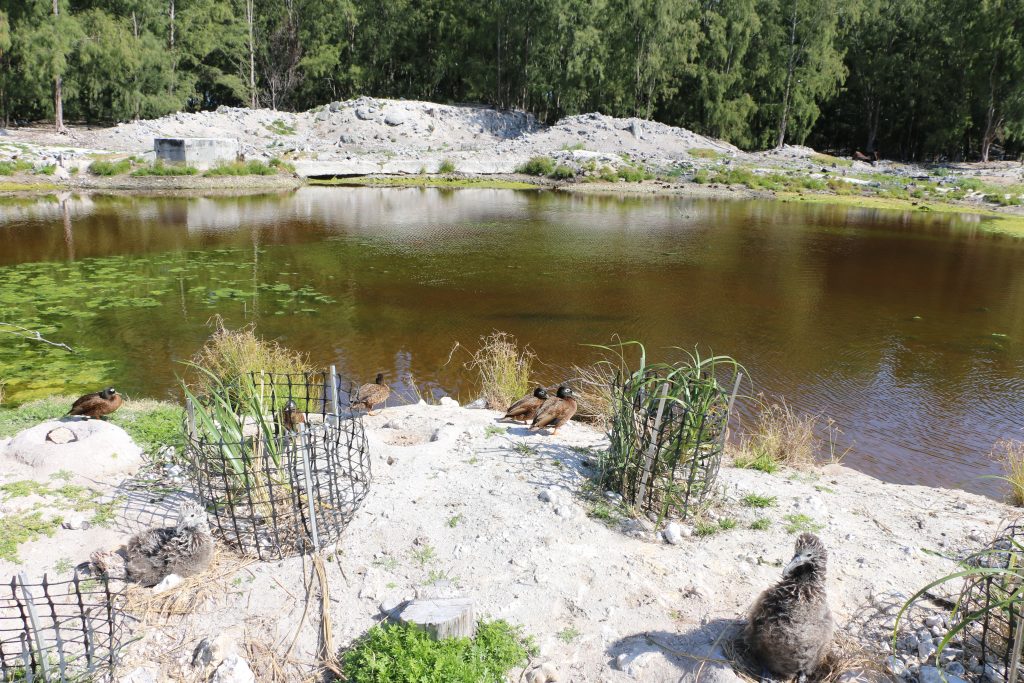