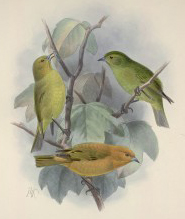 The Maui ‘ākepa is a small, insectivorous Hawaiian honeycreeper (Family: Fringillidae) endemic to the island of Maui and presumed to be extinct, last confirmed sighting was in 1988 (UH PCSU, 2021). There are other ‘Ākepa species found on the island of Hawai‘i (L. c. coccineus) and O‘ahu (L. c. rufus); the latter subspecies is extinct. Currently, all ‘ākepa are considered one species, with the Maui ʻākepa recognized as critically imperiled at the subspecies level. Adults are less colorful compared to the Hawai‘i ‘ākepa, and there is no information on the plumage sequence of the Maui subspecies. The lower mandible of the ‘ākepa is slightly bent to one side which results in the mandible tips being offset; a characteristic shared with the ‘akeke‘e (L. caeruleirostris) and the Hawai‘i ‘ākepa. Although almost nothing is known about its life history, the Maui ‘ākepa likely forages in a similar manner to the Hawai‘i ‘ākepa, and is most often observed in ‘ōhi‘a (Metrosideros polymorpha) forests. Although based on a single observation, in stark contrast to the Hawai‘i ‘ākepa, the Maui subspecies apparently builds an open-cup nest in the terminal foliage of ‘ōhi‘a trees.

Unknown. Probably extinct. Last sightings occurred on the northeastern slopes of Haleakalā between 1,700 and 2,000 meters (5,500 – 7,000 feet) elevation in 1988 (UH PCSU, 2021). Historical distribution is poorly known, but like many Hawaiian forest birds the original range likely included all forested regions of the island.

Virtually all sightings of the Maui ‘ākepa in this century were in wet montane ‘ōhi‘a forests on the northeastern slopes of Haleakalā. These forests vary from intact to degraded. Areas where the Maui ‘ākepa have most recently been observed are managed by the State of Hawai‘i or by the National Park Service.

Unknown. However, the Maui ‘ākepa was likely susceptible to the same factors that threaten other native Hawaiian forest birds including loss and degradation of habitat, predation by introduced mammals, and introduced disease. For Maui ‘ākepa, the following was likely of particular concern: