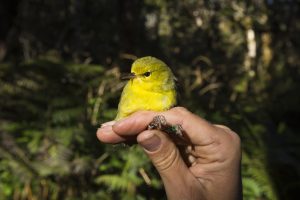 The Maui ‘alauahio, or Maui creeper, is a small insectivorous Hawaiian honeycreeper (Family: Fringillidae) endemic to Maui. A subspecies (Paroreomyza montana) occurred on Lāna‘i but was last seen in 1937 and is presumed to be extinct. Adult males are predominantly olive-green above and have a bright yellow face, throat, and belly; the amount and intensity of yellow varies among individuals. Adult females are similar, but generally not as bright; both have short, fine straight bills. Adult plumage is not attained for several years. The Maui ‘alauahio gleans invertebrates from woody and leafy parts of a variety of plants. Adults defend 1 to 2 hectare (2.5 – 5 acre) home ranges against conspecifics year-round and will chase ‘apapane (Himantione sanguinea) and Japanese white-eyes (Zosterops japnicus) from the vicinity of their nests. They are socially monogamous and pair for life, although extra-pair copulations have been confirmed through genetic analysis. Females choose the nest site and build open-cup nests. They lay two eggs, and birds will renest after a nest failure. Only females incubate eggs and brood nestlings. They do not breed until their third year, and young birds (i.e., helpers) associate with breeding pairs. Helpers are usually offspring from the previous year and feed the female, nestlings, and fledglings. Juveniles are fed for two to three months and remain with their parents in family groups for 18 – 20 months.

Above 900 meters (3,000 feet) on the slopes of Haleakalā. Historically common in west Maui and on Lāna‘i; these populations are now extirpated. Fossil evidence suggests they were common across the south side of the island and in lowland forests.

Primarily wet and mesic montane forests dominated by ‘ōhi‘a (Metrosideros polymorpha), although they also occur in subalpine māmane scrub (Sophora chrysophylla), and in dry and mesic forests dominated by pine (Pinus spp.) and eucalyptus (Eucalyptus spp.; e.g., Polipoli State Park and Hosmer Grove); all populations occur above 900 meters (2,925 feet) elevation. Habitat conditions vary greatly across the species’ range. The northeastern part of the species’ range is actively managed by the State of Hawai‘i, (i.e., Forest Reserve and Natural Area Reserve), the National Park Service, and private landowners including the Nature Conservancy. All entities are current members of the East Maui Watershed Partnership. The remainder of the species’ range occurs on State and Federally owned lands, where management efforts vary considerably.