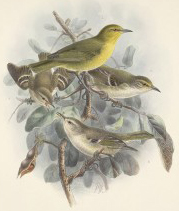 The O‘ahu ‘alauahio is a small and insectivorous Hawaiian honeycreeper (Family: Fringillidae) endemic to O‘ahu. Males are olive-green above with bright yellow underparts and forehead, females are grayish-green above and yellowish white below. The plumage of this species is very similar to that of the O‘ahu ‘amakihi (C. flavus). The song of the O‘ahu ‘alauahio has never been described. The O‘ahu ‘alauahio is insectivorous and forages by methodically searching and probing the bark of large branches and tree trunks. Like other Hawaiian creepers, ‘alauahio joins foraging flocks during non-breeding seasons. Little is known about the life history or breeding biology of the species, but it is likely similar to that of the Maui creeper (P. montana).

Unknown. Probably extinct. Historical range is poorly known as it was likely declining when first discovered, but it historically occurred in both the Ko‘olau and Wai‘anae ranges.

Unknown. Once occupied mid-elevation forests of ‘ōhi‘a (Metrosideros polymorpha) and koa (Acacia koa). Historically, it was reported to prefer large koa trees, but they also were reported in areas without koa. All recent observations occurred in mixed koa/‘ōhi‘a forest between 300 and 600 meters (1,000 – 2,000 feet). Forests where the O‘ahu ‘alauahio historically occurred are largely managed by the State of Hawai‘i, the U.S. Fish and Wildlife Service (USFWS), or the U.S. Military.

Unknown. However, the O‘ahu ‘alauahio likely were susceptible to the same factors that threaten other native Hawaiian forest birds including habitat loss and degradation, predation by introduced mammals, and disease. For O‘ahu ‘alauahio, the following was likely of particular concern: