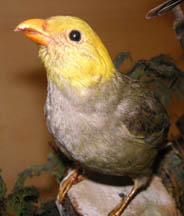 The ‘ō‘ū is a heavy-bodied Hawaiian honeycreeper (family: Fringillidae) with a distinctive thick, pink, parrot-like bill. Adults are olive-green with whitish undertail coverts; males have a bright yellow head. Early naturalist noted that ‘ō‘ū had a strong musky odor, which is retained in museum specimens. Like several of Hawaii’s nectivorous birds, ‘ō‘ū are strong fliers and ranged widely in search of fruit. ‘Ie‘ie (Freycinetia arborea) flowers apparently are an important part of the species’ diet, although ‘ō‘ū also feed on the fruits of Clermontia spp. as well as other native fruits. Geometrid caterpillars are an important food item during the breeding season. Little is known of the species life history and its nesting and breeding habits have not been described.

Possibly extinct. Occupied forests between 900 and 1,500 meter (3,000 and 5,000 feet, respectively) elevations on the islands of Kaua‘i and Hawai‘i. Historically widespread, ‘ō‘ū formerly occurred on all the Main Hawaiian Islands in low- to high elevation forests. They are now presumed extirpated on every island except possibly on Kaua‘i and Hawai‘i.

Although known from a range of forest types, all recent observations have occurred in mid-elevation mesic to wet ‘ōhi‘a (Metrosideros polymorpha) forests with an understory of ‘ie‘ie (Freycinetia arborea), tree ferns (Cibotium spp.), ‘ōlapa (Cheirodendron spp.), kāwa‘u (Ilex anomala), kolea (Myrsine spp.), and pilo (Coprosma spp.). All recent sighting of ‘ō‘ū have occurred on lands managed by the State of Hawai‘i.