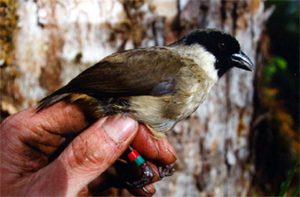 The po‘ouli is a stocky Hawaiian honeycreeper (Family: Fringillidae) endemic to Maui that was not discovered until 1973. Po‘ouli have short wings and tail, a finch-like bill, and distinctive plumage. Aptly named “black-” in Hawaiian, po‘ouli have a large black face mask, white cheeks, throat, and underparts and brown wings and back; no other Hawaiian forest bird is similarly colored. This species, not well-studied, males and females are similar in appearance with females displaying a grayish throat and breast. Little is known of the species’ life history. Po‘ouli documented joining hunting parties comprised of several species. Forages primarily in the sub-canopy and understory on tree branches of native shrubs and trees where they search moss, lichens, and bark for snails and arthropods. Breeding biology is based on observations from a single nesting pair and may be biased because of extremely low population density. For example, territorial behavior has not been observed. Nests are similar to those of other Hawaiian honeycreepers and are placed in ‘ōhi‘a (Metrosideros polymorpha) trees. Only the female incubates eggs and broods nestlings; the male feeds the female on and off the nest.

Likely restricted to a 1,300 hectare (3,200 acres) area between 1,440 and 2,100 meters (4,750 – 7,000 feet) elevation on the northeastern slope of Haleakalā on Maui. No historical data on range, although fossil evidence indicates that po‘ouli once occurred over a wider geographic range.

Mixed shrub montane wet forest dominated by ‘ōhi‘a, with an understory dominated by a diversity of small trees and shrubs, many of which are used as foraging substrates (e.g., kanawao [Broussaissea arguta], kāwa’u [Ilex anomala]). Habitat conditions in areas once occupied by po‘ouli are variable but improving. All known individuals occurred in the Hanawī Natural Area Reserve which is managed by the State of Hawai‘i.

Unknown. However, po‘ouli is likely susceptible to the same factors that threaten other native Hawaiian forest birds, including habitat loss and degradation, predation by introduced mammals, and introduced disease. For po‘ouli, the following are likely of particular concern: