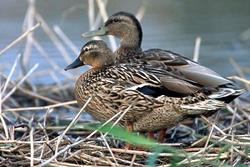 Unbeknown to most, Hawaii’s native duck, the Koloa Maoli, has been a part of the ecosystem of the Hawaiian Islands for tens of thousands of years. It is unique to these remote islands – found nowhere else on Earth. Like many native species it is threatened with extinction from the combined forces of habitat loss, introduced predators, historic overhunting, etc., but is unusual in that it faces an additional threat – that of hybridization (or cross-breeding).

Hybridization occurs when two distinct species interbreed and produce fertile offspring. In the case of the Koloa, this has occurred with the domestic mallard, many of which have been released by people into the wild and become feral. Domestic mallards are notoriously effective breeders, and can hybridize readily with even distantly related species of duck. This added pressure is threatening the very existence of the Koloa, and has the potential to add one more Hawaiian bird to the already too long list of extinctions.

CLICK HERE to view a pdf document describing hybridization and the Koloa in more detail.

For answers to some commonly asked questions about hybridization, please have a look at these Koloa Maoli hybridization Q&A’s (pdf). 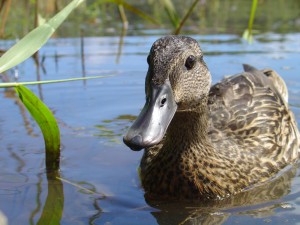 Recent research conducted on the population of ducks on Kauai has revealed very low levels of hybridization. This is both unexpected and extremely encouraging, as it means that the Koloa on Kauai are maintaining their distinctiveness and not hybridizing with mallards. This is in no small part down to the hard work and dedication of the people of Kauai and state and federal wildlife workers. By removing feral mallards from the wild and reducing the numbers of mallards in ponds, the native Koloa far outnumbers the mallards – it is this that is the key to the successful recovery of the Koloa.

What Can I do to Help?

There are some simple things you can do to help the Koloa Maoli;

– Tell your family and friends about the Koloa! If you have kids, tell them about Hawaii’s unique plants and animals and why it’s important to protect them and their habitats.

– Don’t release ducks into the wild! While this advice may not apply to most people, perhaps you know someone who keeps ducks or is thinking about buying one as a pet (not such a good idea!). Let them know how releasing domestic ducks is threatening Hawaii’s native Koloa.

– Don’t encourage mallards! Everyone loves to feed ducks, but this encourages the successful breeding of more and more mallards. Not only do they threaten our native Koloa, but they are also a health risk as their waste finds its way into pools, parks, and the ocean.

The Story of Umi

The Hawaiian duck has its place in the folklore and legends of Hawaii, and is said to have been a guide to Imaikalini, a fierce blind warrior king. When Imaikalini went into battle, the ducks would alert him to the presence of his enemies, quacking to indicate their location. The warrior king would unleash a volley of ten spears, five from each hand, which the Koloa would guide to their target – a deadly battery of such power that it is said that no man could evade their horror. 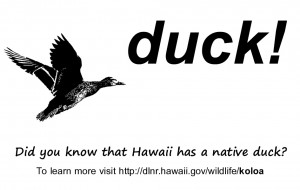