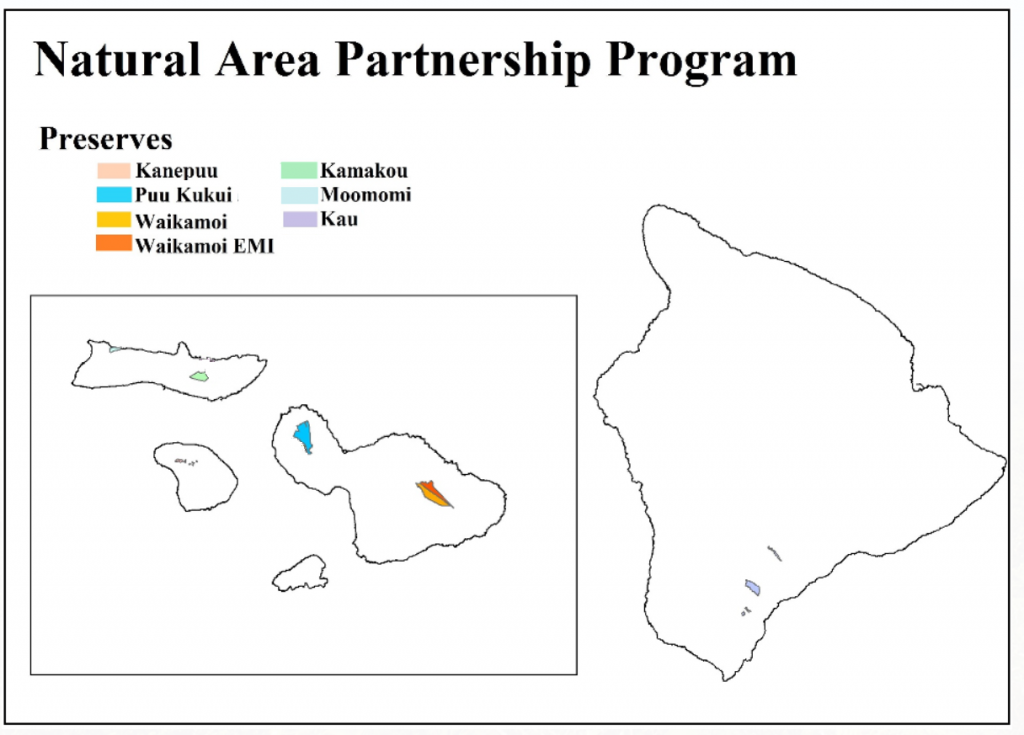 Kanepuʻu Preserve is comprised of 590 acres in 7 disjunct units and represents the last major remnant of a dryland forest community that once covered large portions of Maui, Lanaʻi, Molokaʻi, and Kahoʻolawe. Ten rare plants, six of them federally listed, have been reported from the Preserve. Protection from axis deer, removal/control of non-native plant species and use of the Preserve as a focal point for dryland forest restoration research and study have been and will continue to be the primary management activities.

With over 8,600 acres, Puʻu Kukui Watershed Preserve is a critical component of regional protection efforts on West Maui that include over 13,000 contiguous acres. Fourteen native natural communities, 2 of them rare, are found in the Preserve along with over 40 rare plant species and 6 endemic species of land snails. Primary management efforts are focused on the removal of feral ungulates and control of non-native plant species.

This 2,774 acre Preserve helps increase regional protection efforts for the important watershed and native communities found in East Molokaʻi. Thirty seven of the plant species are rare with 18 of these species listed as federally endangered. In addition, Kamakou protects habitat for 5 native forest bird and 5 rare native land snail species. The primary management focus is to prevent degradation of the native forest by reducing feral ungulate damage, limiting the spread of non-native, habitat-modifying plants, and preventing wildfire.

This 5,230 acre Preserve helps increase regional protection efforts for the important watershed and native species habitat found in the east Maui Watershed Area. This Preserve provides critical habitat for 13 native bird species, 8 of which are federally listed as endangered. Fourteen native natural communities, 2 of them rare, are found in the Preserve along with 25 rare plant species. The primary strategy for the protection of Waikamoi is to reduce damage to vegetation and soils by removing all ungulates.

This 3,500 acre Preserve on the southwest flank of Mauna Loa volcano on Hawaiʻi island lies within the largest and most intact expanse of native forest in the state. More than 100,000 acres of koa and ʻohiʻa forest have been protected from logging and major weed invasion by a combination of their remote location, rugged terrain, and conservation designation. The Kaʻu forest serves as a vital watershed and provides habit for rare and endangered forest birds like the ʻakepa, ʻakiapolaʻau, and Hawaiʻi creeper. The region also provides potential habitat for the reintroduction of endangered species such as the ʻalala, or Hawaiian crow. Management goals on the Preserve include reducing feral ungulate damage, removing habitat-modifying weeds, preventing wildfire, and facilitating public access to the forest.

This 3,721 acre Preserve on East Maui Irrigation Co. Ltd. (EMI) lands is adjacent to the 5,230 acre Waikamoi Preserve. The property lies between 3,700 and 7,800 feet elevation and has some of the highest quality and weed-free native forest in the state. This preserve contributes to East Maui Watershed which is rich in biodiversity and supports hundreds of native plant species. EMI lands has been designated as critical habitat by the U.S. Fish & Wildlife Service to protect the Hawaiian endemic plant, hinahina and eight additional rare plant species. The management priority for the preserve is species recovery through ungulate and weed control measures.

This 1,264 acre Preserve is a component of regional protection efforts for the important watershed and native communities found in the West Maui Mountains. Containing ten native dominated communities, 24 rare species or plants (five federally listed), as well as four rare snail species, the Preserve’s upper elevations are recognized as among the highest quality native areas in the State. Prevention of new introductions and control of both animal and plant non-native species are the primary objectives of Preserve management efforts.

Pelekunu Preserve, located on the north shore of Molokaʻi, is a 5,759 acre Preserve established to protect the free-flowing Pelekunu Valley Stream System which is one of the best in the State. It is also part of a larger regional management effort that provides protection to over 22,000 contiguous acres on Molokaʻi. Pelekunu contains nearly all the native Hawaiian aquatic fish, crustacean, and mollusk species. In addition, 27 rare plant, 5 endemic forest bird, and 2 endemic land snail species have been reported from the area.