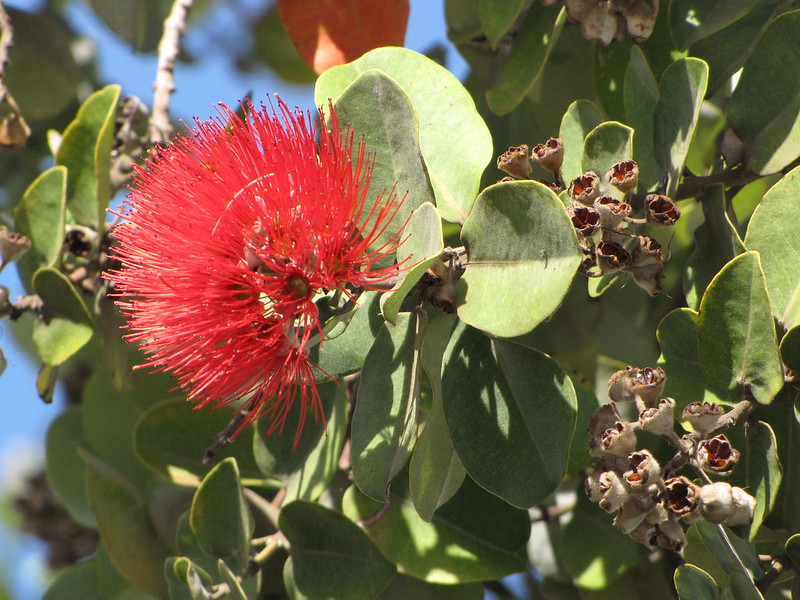 Threats: Discovered on Hawaii island in 2014, Rapid Ohia Death (ROD) is a fungus (Ceratocystis fimbriate) that attacks and quickly kills Ohia trees. On Hawaii thousands of Ohia trees have already been killed by ROD. As researchers believe this fungus can spread over long distances, ROD has the potential to kill Ohia trees across the entire state.

About this Species: Ohia was used by early Hawaiians to create weapons, everyday tools, and medicinal teas. Leaves of this tree sustained populations of native birds, such as the apapane and the mamo, whose vibrant feathers were used in traditional Hawaiian clothing and ceremonial adornments. Today, Ohia blossoms continue to be used in cultural ceremonies and practices, such as lei and hula, though many hula practitioners have begun forgoing the use of Ohia to prevent the spread of ROD and protect this culturally significant tree species. Adapted to the variable and sometimes harsh weather conditions of the Hawaiian islands, Ohia play a key role in watershed protection and water conservation by retaining water following storm events and preventing subsequent erosion and flooding.