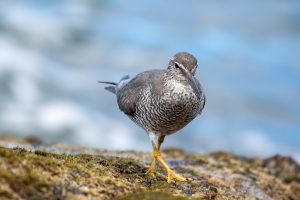 The ‘ūlili, or wandering tattler, remains one of North America’s least known birds. ‘Ūlili winter in the Hawaiian Islands, arriving in stages (adults from July to August, juveniles September to November) and showing strong winter range fidelity. Diet varies with season, and in winter mainly consists of invertebrates such as marine worms, aquatic insects, mollusks, crustaceans, and small fish. On nonbreeding grounds, forages in intertidal habitats (such as coral reefs), less frequently in soft mud or sand, picking food from moist substrates or surface of shallow water. ‘Ūlili also forage along mountain streams, in wetlands, fish ponds, and human-modified areas.

‘Ūlili breed mostly in mountainous areas of Alaska, and also in eastern Siberia, but densities are sparse so that precise identification of breeding areas is lacking. Winter range includes most of Oceania from Hawai‘i through more southerly archipelagos. Most abundant in southern and central Pacific. Less common or infrequent in more distant areas of the Pacific. In Hawai‘i, ‘ūlili are more prevalent on shorelines of the NWHI than in the MHI.

Wintering habitats throughout the Pacific and mainland Asia are more varied than breeding habitat. ‘Ūlili are common in coastal areas on coral reefs and the basalt platforms of most atolls and islands. They will also make use of soft substrates, especially river mouth areas and littoral margins of lagoons. In the NWHI, they can be found on pickleweed (Sesuvium portulacastrum) flats, and elsewhere in Hawai‘i they will forage in grassy areas around airports and golf courses.