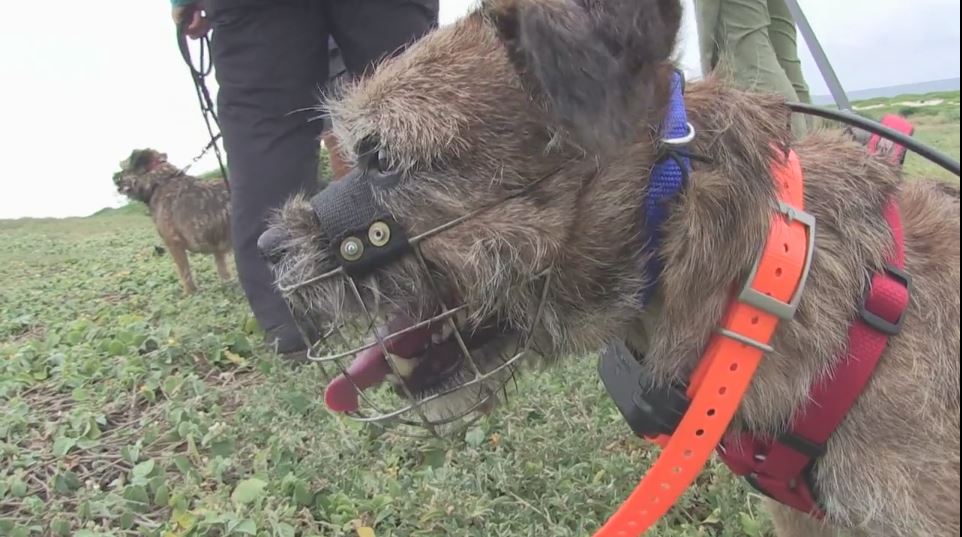 Since the operation last summer, monitoring teams continue to observe more albatross on Lehua Island than previously seen. There continues to be no sign of rat predation on plants or seabird eggs, something that was commonplace a year ago.

“Whole island eradications are very complex and seeing a few surviving rats is a reflection of this,“ explained Sheri Mann, Kaua‘i Branch Manager for the DLNR Division of Forestry and Wildlife (DOFAW). The Lehua Island Restoration Project Partnership is working to ensure the island is free of invasive rats. An extensive network of motion-triggered cameras picked up seven rat images since last fall and the team is working diligently to address the situation.

That’s where the small dogs come in.  Border Terriers have a long-established reputation of being able to pick up the scent of rodents.  Henry and Reece are owned by Charlotte Metzler of Hawi, Hawai‘i who along with Certified Professional Dog Trainer Kyoko Johnson of Country Canines spent months preparing the canine pair for their Lehua deployment. The training included trips to O‘ahu’s Ka‘ena Point Natural Area Reserve. The natural environment there closely duplicates what the dogs encountered on Lehua.  Johnson said, “The major thing we wanted to do in training is to desensitize the dogs to the presence of seabirds, so they can focus on their task of finding rats above ground or in burrows.”

Once Henry or Reese catch the scent of a rodent their human handlers and monitoring staff with DOFAW and Island Conservation mark the location. Mele Khalsa of Island Conservation remarked, “With the help of these dogs we are able to actively search for recent rat activity and can tailor more effective responses of those specific areas.”  Dogs, like the Border Terriers, have been successfully used in other conservation projects around the world.

It was a tough week of sniffing for Henry and Reese.  The grass on Lehua currently is well over their heads and much of the ground they traversed is steep, loose, lava rock.  While Lehua is only 279 acres in size, its topography made the canine’s rat search very challenging with the need for lots of water and rest stops. Conservation detection dogs have been used previously in Hawai‘i to locate endangered species like the Hawaiian hoary bat and the wedge-tailed shearwater to measure impacts of wind farms.  The U.S. Fish and Wildlife Service, one of the partners in the Lehua restoration effort used them in a pilot study to try and detect avian botulism in the koloa maoli, the endangered Hawaiian duck.

During their first deployment to Lehua the dogs showed significant interest in three locations. All of these potential rat burrows were targeted for additional bait application and marked to check in the future. Plans are being made for Henry, Reese, and their handlers to return to Lehua for additional searches.