Kauaʻi is part of the most isolated island archipelago in the world, and is home to many rare plant and animal species. There are also many  plants and birds that are very important to the native Hawaiian culture have gone extinct on Kauaʻi. The remaining native forests of Kauaʻi must be protected in order to preserve what is left.

While there are many causes of changes to the native Hawaiian ecosystems, on of the most critical factors has been the introduction of hoofed animals. The only mammals that are native to Hawaiʻi are marine mammals (whales, seals, dolphins) and one species of bat – the Hawaiian hoary bat (opeʻapeʻa). When hoofed animals were brought here by Polynesian voyagers and early European explorers, the locally adapted plants and animals were not equipped to handle the pressures of these new species.

Hoofed mammals, also called ungulates, disturb forests by trampling and eating vegetation; leaving behind barren dirt, which leads to erosion, landslides and rockfalls. Browsing animals such as goats and deer prefer the soft, tender native plants to the often tough or spiny introduced plants. Feral pigs also root for earthworms, turning up large patches of forest in their search for these underground treats. In other places, irreplaceable native Hawaiian archaeological sites are being toppled by goats and pigs.

Hunting feral ungulates for food and tradition plays an important role in balancing the needs of humans and conservation of forests (see our hunting page). But in some upland areas of Kauaʻi, where there are high concentrations of rare plants and animals, hunting alone is not doing enough to protect these precious resources. This is where fencing becomes critical.

Fencing is a proven way to stop hoofed animals from damaging native forests and to allow recovery of native plants and animals. Throughout the Hawaiian islands, ungulate proof fences have been constructed to preserve and protect native forests and watersheds.

On Kauaʻi 3% of native forests have been protected to date by fencing. The story map on the home page shows the existing fences on DLNR lands. This amount of protection is far less than other islands. Kauaʻi DOFAW strives to do better!

The long term strategic plan for where and when to fence is based primarily on these documents:

The Economics of Fencing

■ For every $1 invested in fences and watershed protection, ~400 gallons of water is saved. ■ When water supply declines, expensive alternative water sources are needed.  For example, the estimated cost of a desalination plant for Oʻahu is $40M to construct and $5.4M per year to operate. ■ Feral pigs alone cause $1.5B worth of damage nationwide.

DOFAW plans to erect hog wire or panels fencing in high biodiversity areas that is designed to keep out goats, pigs, and black-tailed deer. In certain remote areas, small predator-proof fences will be built to provide safe places for endangered seabirds to nest, a similar predator-proof fence was built near Kilauea Point. 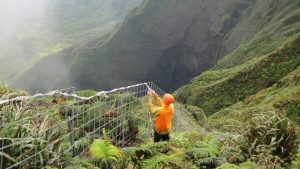 DOFAW staff installing white tape on top of fence-line. This allows seabirds visibility of fences, when returning and leaving for nesting.

The online map also includes areas where hoofed animal removal is occurring or proposed through fencing and staff control. Hoofed animals (goats, black-tailed deer, cattle, and pigs) are an integral part of much of the lands that DLNR-DOFAW manages, but in some limited areas their populations must be controlled or restricted. For example, in certain areas they are eating extremely rare plants or ground nesting seabirds, and so are threatening to cause the extinction of these species. Many rare plants and birds with enormous significance to the native Hawaiian culture have recently gone extinct on Kauaʻi due to hoofed animals.  In other cases, the populations are so high that the previously forested areas have been eaten and trampled and are now barren dirt, causing erosion, increased landslides and rockfalls.

This loss of forest is also problematic because the forest plants capture and purify fresh drinking water supplies.

Additionally, greenhouse gases are emitted when plants are consumed, worsening climate change. In other places, irreplaceable native Hawaiian archaeological sites are being toppled by goats and pigs. While DLNR-DOFAW’s first approach to control hoofed animals is by using public hunting when safe, feasible, and effective, there are also additional areas where hoofed animal control may need to occur by staff. Many locations on Kauaʻi are too remote and steep for public hunting, so other tools such as fencing and staff control is needed.

Maintaining a recreational public hunting program that does not threaten the persistence of native species and ecosystems in Hawaiʻi is a complex endeavor. Public hunting can provide a useful tool in controlling game mammals on public and private lands where control is needed and funds are scarce. DLNR-DOFAW’s public hunting program supports and facilitates hunting on public and private lands by providing a structured program that promotes and encourages participation. The program aims to direct hunting toward less ecologically sensitive areas, while at the same providing structured hunter access to more remote/pristine sites where recreational hunting can help to control game mammal populations.

In addition to fenced units, DOFAW will focus on staff control on this hooved animal removal zone. These are most appropriate for staff control because:

These  areas  are  next  to  proposed  fences.  It  is  important  to  minimize  outside  animal  pressure  from entering fenced units. Staff animal control will occur on the ground. During this period, surveys will be  done  to  determine  whether  aerial  shooting  will  be  needed  in  the  future,  particularly  in  steep inaccessible cliffs where it is unsafe to send staff to control goats.

Since these cliffs contain the last individuals of many rare plants, the Department’s goal is to have zero hooved animals in these locations. The  Department  is  interested  in  gathering  hunter  input  on  ways to  increase  hunter  access  to  this region,  however  access  options are limited  due  to  extremely  steep  cliffs.    If  surveys  determine  the need  for  aerial  shooting,  a separate  plan  will  be  prepared  for  approval  in  accordance  with  DLNR Policy. 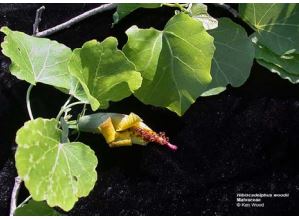 Click the layers on an off to explore different aspects of the web map below.