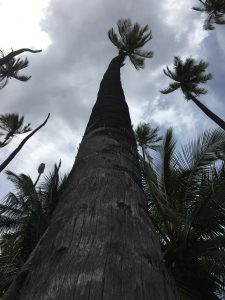 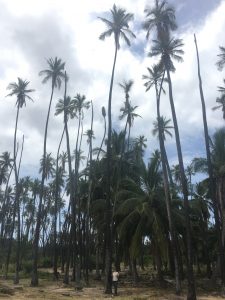 Nominated By: Division of Forestry and Wildlife

Range: This species can be found at elevations of less than 150 ft.

About this species: This species is indigenous to Hawaii; it is a naturalized Polynesian canoe plant. Coconut Palm is one of the most useful plants in the world, as Early Hawaiians were able to repurpose almost every part of this tree species. Coconuts provided food and emergency drinking water while oil from the meat was also applied cosmetically to the skin and hair. Kitchenware, such as spoons, cups, bowls, and containers could be made from coconut shells. Leaves and husks were used to create cordage, baskets, and roofing thatch among other goods. Niu trunks were also used for house construction, canoe building, and drums.

Interesting Fact: Kapuāiwa Coconut Beach Park holds one of Hawaii’s oldest and most sacred coconut groves. Located in Kaunakakai on the island of Moloka‘i, the first coconut trees were planted in the 1860’s by King Kamehameha V (Lot Kapuāiwa). A few hundred coconut trees still remain in the 10-acre grove, some being the original trees from the first planting. Also residing here is the dethroned niu champion of 2011. The previous champion stood 103 feet tall, but has completed its life at the grove along with many more of the old trees. Fortunately, the community is caring for this ancient grove by fostering the new generation of young coconut trees that are growing here.